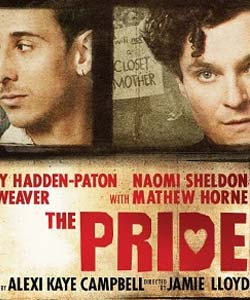 It is hard to find fault with this production on any level, the buzz before the show started was great, you could tell that everyone was really looking forward to seeing The Pride and there was lots of chatter about it in the bar and foyer before the performance had even started. The show started

and it had the audience hooked from the very first word. Total silence and eyes fixed on the stage as the story started. All four actors play amazing roles, all at the same level and it really is an emotional rollercoaster with many moments of high comedy, coupled with some really graphic and disturbing

The comedy timing of Al Weaver is outstanding and he has some of the funniest lines that we have heard in a while, showcasing both the superb writing aswell as the performance. Hard hitting scenes and there are a few, are again played wonderfully by the dashing Harry Hayden-Paton, whose performance is flawless. It was fascinating to see the audience react to these moments which were played out superbly. Mathew Horne shows total diversity in the characters that he plays as does Naomi Sheldon and the way the story unfolds is very clever. The story is one that many gay man can relate to from past experiences either personally or from friends and I think is central to the magic of The Pride.

At its heart is real life, told in a very real manner. Great theatre is that which makes you leave discussing, thinking and debating it further.This WAS great theatre.

I loved too the simple but very effective set, which allowed the performers to be the focus and boy did they shine. The Pride for me was a fascinating, emotional rollercoaster that delivered way above expectation and I cannot encourage everyone I meet to go and see it.

The high praise and debate amongst the theatre goers during the intermission and the rapturous applause the cast got that the end seemed to us to speak for itself.

This show runs until Fri and some tickets are still available.Click here for more information.