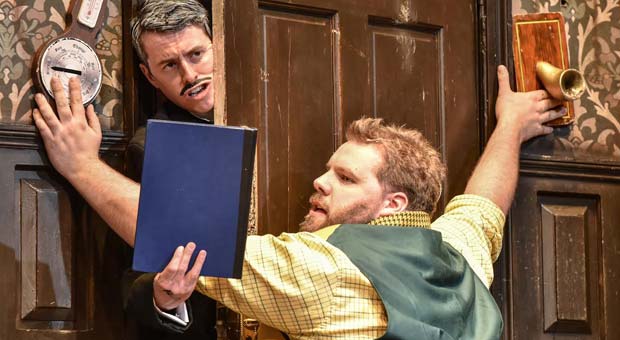 The Play That Goes Wrong

Does it go wrong? Well, of course it does. On paper, Mischief’s “The Play That Goes Wrong” sounds like a flop. A (fictional, impossible) polytechnic drama society puts on a sub par murder mystery story, boring. If you have seen other shows my Mischief theatre shows or their TV show, "The Show That Goes Wrong", you know to expect the unexpected. Well in the case it’s a complete hoot and rip roaring success.

So, who are Mischief? They’re a group of actors that studied at LAMDA in 2008, created an improvisational group and started performing across the UK. They started developing a scripted show and have since created numerous shows which are performed all over the world, including The Comedy About A "Bank Robbery", "Groan-Up’s" and "Magic Goes Wrong". Their award-winning formula of being serious actors about silliness ensures they're providing everyone with the opportunity to jailbreak from their everyday restraints of life, to smash the set-up in process.

One thing, do get the show early, at about 7pm as the dysfunctional creative crew will be playing front of house staff and making sure everyone laughs along with their audience interaction. You’ll also find Nancy Zamit and Rob Falconer working as set crew trying to fix the issues and involving a member of the audience in helping fix the set. It's all completely slap stick from items falling to the set being stuck together with tape and of course a bit of falling over.

The show is perfectly written as a play set within a play that immediately gives free license to break the fourth wall, allowing the cast to brilliantly interact with the audience and truly vibe off each other. But of course the “Cornley Drama Society” ill prepared, accident-prone, and dealing with internal problems, but the show must go on which is Henry Shields demonstrates time and time again.

The play starts with Henry Shields doing he famous piece “I am the directorrrrr” which is receives raptures applause. The respect for all the characters is repeated and is well deserved, to show that Manchester loves the actors from the Show/Play that goes wrong.

I do think that the audience couldn’t believe the luck to have the original cast from stage shows and the tv specials on stage, it was absolutely fabulous I’m a lover of the show, so I was in my happy place.  To say the show is perfect for all ages is a bit odd given the title, but it's very well written, brilliantly executed, the beloved actors, act flawlessly even when the stage falls apart.

Henry Shields, who cheered us all on with as a pro, there was a great moment where he shows temper as everyone falls apart that leads to a pantomime moment of "its behind you", revealing his playfulness and energy he generates through the immense and perfect improvisation. Henry Lewis has the gift of line performance which brings any audience to hysterics. His wording is excellent, and his physical comedy and strength in the room is fantastic.

Dave Hearn is a joker but adorable, childish and perfect character. His ability to act so silly, so free and so uninhibited wins hearts again and again from the audience. Rob Falconer plays the forgetful and down right unless technician with such passion that at times you really forget he's actually part of the show, even when he takes a phone call. He amusingly turns things around and finds himself in the position of kissing Dave Hearn.

Charlie Russell and Nancy Zamit deserve so much respect for the shared part and the huge amount of slap stick they deal with which is excellently timed. Jonathan Sayer plays his part of pretending he can’t act, doesn't remember his lines, and couldn't understand the basics of theatre timing, his silly approach is brilliant. Greg Tannahill is the strangest corpse I've ever seen. He doesn't say lines for until 3/4 of the way through act 1, but his stage presence and acting are so good that he makes everyone look forward to his physical jokes.

The moment of "The Play That Goes Wrong" is key, and the cast are experts in timing, performance and the constantly juggling all elements into the performance. I have to say, wrong, is the new right! You must book to see this as is electric and fantastic production.

This is definitely a show I could see again and again.

Running till 4th June at the Palace Theatre Manchester. via HERE