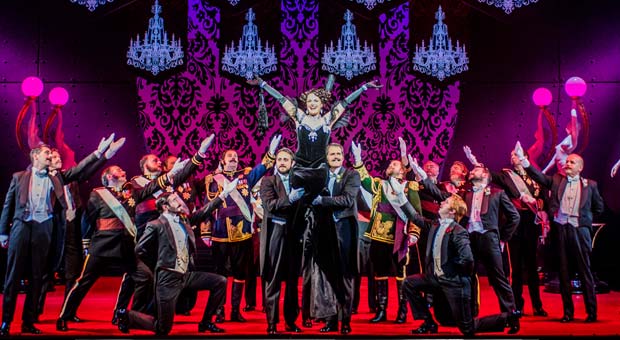 The Merry Widow at The Lowry

On Thursday, November 15th, Opera North celebrated its 40th birthday with a splendid production of The Merry Widow at The Lowry, in which Lehár’s operetta took us back to a fin de siècle Paris where marital infidelity amongst the upper echelons was as rife as it (presumably) is today. It has a large cast.

Both singers and orchestra were in top form, resulting in a polished performance that had us tapping our feet nicely.

The staging is good, with subtle changes that switch the space between an embassy, a garden party and Maxim’s. The dancing is accomplished, and at times riotously camp – in one twice-reprised routine the main male characters perform a routine worthy of The Tiller Girls.

The soloists were excellent with top marks going to Máire Flavin (Hanna) and Qurijin de Lang (Danilo), with a special mention going to Gillene Butterfield who stepped in to play Valencienne due to Amy Freston’s indisposition. The chorus were solid in their support too, as indeed were the acrobats.

Bizarrely, the only time things seemed to drag slightly was during the Can-Can – it went on for just a little too long and broke the pace somewhat. It’s a small point though.

The performance is in English, with some nice little topical jibes here and there, and, for those with hearing impairments, two side screens provide the words.