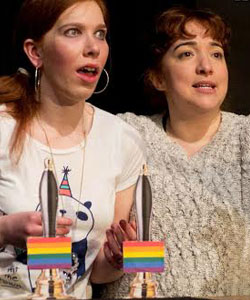 'From Grand Dame Theatre and award winning writer Tess Humphrey comes a brand new farce about life, death and things that go bump in the night.

We were there and here is what we thought?

The 5 th Greater Manchester Fringe is running throughout July at venues across the region. The Castle Hotel, on Oldham Street, is a venue with a 250 year history, restored over recent years to its former glory, and offers an intimate performance space at the back. Tonight, with Lord Mayor Carl Austin-Behan in attendance, the venue hosted Grand Dame Theatre’s The Lionheart Phantom, billed as a brand new farce about life, death and things that go bump in the night.

On a busy night during Manchester Pride, Wendy’s Canal Street gay bar – The Lionheart - is empty, and the imminent arrival of the Health Inspector does not bode well. Struggling to keep the bar she took over from her father open, the suggestion of a gay ghost might just provide the miracle she needs.

Jane Hamlet leads the cast as the struggling landlady, coping not just with business challenges, but also with her son James (Sam Retford) coming out as straight despite being raised by two mums for the last 25 years. The farce plays out with health inspector, ditzy barmaid, sleeping drunk and TV ghost-hunting film crew colliding head on.

Previously performed at the Salford Arts Theatre, this revised production now runs as a single act: one long act that needs an interval, if only to take a break from the uncomfortable seating. The pace at times was slow, and the cast looked as though they were used to a larger space to perform in, but overall this was an entertaining evening with some solid performances and clever writing – a Manchester Village twist on the classic farce genre.