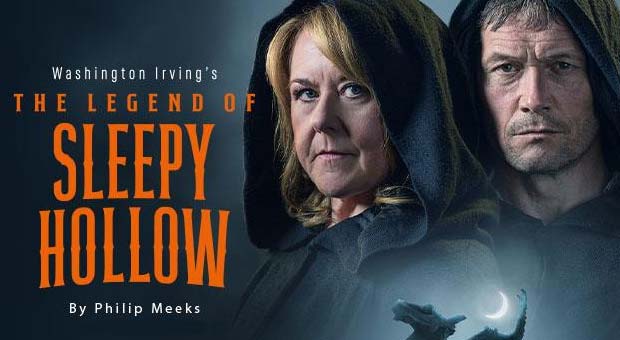 The Legend of Sleepy Hollow at Oldham Coliseum

The Legend of Sleepy Hollow, mostly based on the 1819 story by Washington Irving, opened at the Oldham Coliseum on October 26th. It runs until the 30th, and the timing is perfect for Halloween.

The story has been reworked in a number ways, with a completely new character (the widow Mariette Papenfusss played by Wendi Peters) and a slightly gay element introduced between Ichabod Crane (played by Sam Jackson) and Brom ‘Bones’ Van Brunt (played by Lewis Cope) his rival for Katrina’s hand. These alterations work well, some of the others less so, and although the choreography was a bit distracting at the time I now appreciate its purpose.

The remaining main parts of Balthus Van Tassel, Katrina Van Tassel and Joost De Groot are taken by Bill Ward, Rose Quentin and Tommy Sim’aan respectively. Other smaller roles are provided by the main actors doubling up on parts, which at times is quite camp.

The original story is only 24 pages so it’s quite a feat to stretch the play out to almost 2 hours, but the pace was just about maintained. The acting sometimes stretches credulity a bit – but this is a horror tale after all – and sometimes the accents slip out of Westchester into Lancashire and possibly Cockney. At other times things didn’t flow quite as well as they could have done between scenes. Full marks must go to Wendi Peters and Sam Jackson for their portrayals though, but that’s not to diminish the others.

The set is good and works well, but the effects (dry ice and sound) are at times a bit overdone. That said, the shadow projection of the legend’s origins in the second half was brilliant.

The tension builds towards the end when the truth of the legend is brought home to Ichabod and the chilling effect that was missing earlier finally arrives, and at the very end we see that their collective life, such as it is, goes on  (and on, and on).

The comic style programme is a nice touch, and the tour continues at various locations until early December.

More details and to book tix.