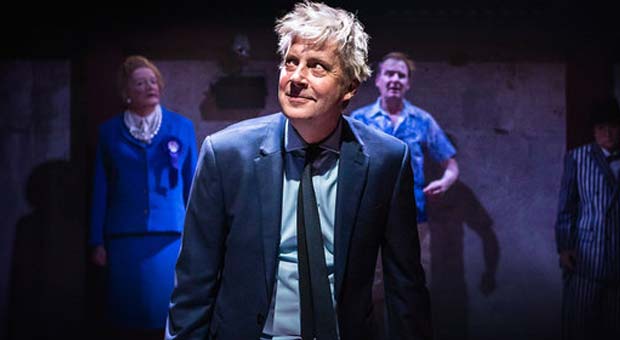 The Last Temptation of Boris Johnson at The Lowry

The Last Temptation of Boris Johnson, by Jonathan Maitland, opened at The Lowry on March 2nd. It has an excellent cast led by Will Barton as Boris, ably supported by Bill Champion, Emma Davies, Claire Lichie and Tim Wallers who perform several roles each with extremely rapid and frequent costume changes. Somehow they keep things together without descending into farce.

The play starts in 2016 and Act 1 covers the vacillations and skulduggery of the events leading to the Brexit referendum and subsequent leadership battles. Act 2 is set in 2029 and covers the aftermath of 10 years of independence. In both acts Boris is visited by the spirits of Mrs Thatcher, Winston Churchill and Tony Blaire who offer conflicting advice on whether to leave or stay. It’s a bit like Christmas Carol

Will’s portrayal of Boris as a power-crazed toper who can’t keep his trousers on is very funny indeed. Emma has Mrs Thatcher’s measured tones and mannerisms off to a tee. Bill plays Michael Gove as an unctuous turncoat very well. Tim plays Tony Blair as a spiv who is always looking for that next opportunity. Claire plays Marina (Boris’s ex-wife) and Caitlin (his latest conquest) with exactly the right degree of control. It helps that everyone resembles the people they play, and it really could be Johnson and Gove on stage.

This production brings the  play up to date with some good topical references, and Manchester and Salford are also mentioned – a nice touch. The political punches are there but they land softly, unlike the ones in the closing fisticuffs between Boris and Gove after which things literally come crashing down.

There are some excellent lines, and Caitlin’s description of making love with Boris was like a wardrobe falling on her with the key left in brought the house down.