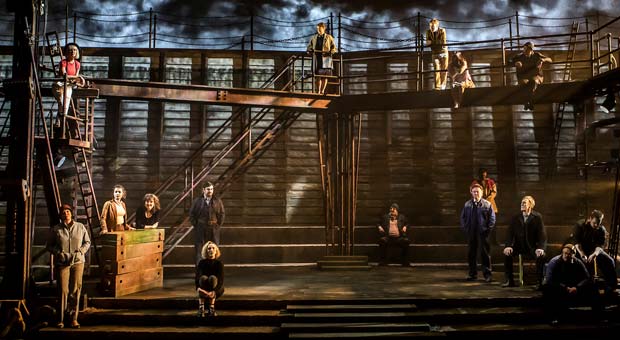 The Last Ship at The Lowry

The Last Ship at the Lowry

I had been looking forward to seeing Sting's musical The Last Ship, but because opening night at the Lowry was on the day of a big England football match, I expected to see plenty of empty seats. And sure, there were a few people checking their phone frantically during the show, but people turned out in droves to see this handsomely mounted Newcastle set musical and they were rewarded with an appearance from Sting, himself during the curtain call.

What makes this musical stand out, is he sheer defiance of the characters. When their local shipyard is threatened with closure, they refuse to sit back and watch, as every character is strong, including the women. Frances McNamee's Meg is a feisty single mum, educated and independent and when her childhood sweetheart, Gideon (The brilliant Richard Fleeshman) comes home, she refuses to had her head turned. This love story does feel a bit similar to Jack and Rose in Titanic, in terms of the meaning for it's existence. But, these two performers are so dazzling and stoic, and their vocals are incredibly pure and powerful, that they lift this story arc, to become something really heartwarming and incredibly moving.

Penelope Woodman is also terrific as Peggy White, a well respected pillar of the community, and she is matched by Joe McGann. His accent may waver, but he brings heart to the role of Jackie White - the mastermind behind the plan to keep the shipyard alive. Parisa Shahmir is a true star, as she narrates, sings, and plays the guitar. You cannot take your eyes off her, as she anchors the piece and clearly loves singing Sting's stirring tunes.

59 Productions set design is one of the best use of projections I have see on stage, it really gives the piece a sense of scale, highlighting just how many people in the community, rely on the shipyard to put food on the table.

There are shades of Billy Elliot throughout, as characters often defy your expectations by changing tact for the good of the community. And, during the final few minutes mentions of the NHS and movements which are currently galvanising people all over the world, feel timely and relevant, rooting this musical in the present.

Sting's music and arrangements here have a Celtic feel and there are songs you will recognise, including the brilliant "When We Dance" (delivered with authority by Fleeshman and McNamee) but far from shoe-horned in, they feel part of the narrative. This is not a juke box musical designed to please Sting's fans, it has a power all of it's own.

I was completely won over by this superb show, and urge you to catch it this week at the Lowry, as it's the final week of the tour. Judging by the reaction to this first outing in the UK, I can see this sailing back to the regions, or the West End real soon.

The Last Ship is at the Lowry until 7th July.