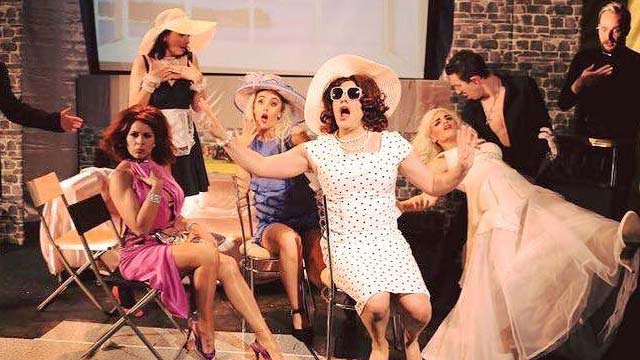 The Great American 80s Soap Opera at the King's Arms

The immensely talented Vertigo Theatre Company are back at the King's Arms in Salford, this time presenting The Great American 80s Soap Opera. The Eighties were the heyday of American soaps. Daytime ones such as The Bold And The Beautiful and the prime timers, many of which were also shown here such as Dallas and Dynasty.  All are parodied beautifully in this fast and hilarious show.

The soap Vallient's Point is losing it's audience and the Studio want some changes made  so that the audience figures go up again.  Writer Darren is given free rein to create whatever storyline he wants  despite the protests of the show's Creator/Director Aaron.  So Darren begins to create more and more unbelievable plots for the show's characters, but the plots aren't as strange as the actors' real lives.

The show's matriarch is potrayed by fading actress Cristal St James, still living in the dream that she  is a big star while her oncreen twin sister is played by Catherine Cooper-Connors, an aging beauty who never lets anyone forget she was a stage actress.  Theirs is a rivalry which knows few boundaries but are both fearful of the younger, prettier members of the cast.

Dale Vicker as Cristal is incredibly funny.  He also has excellent comic timing which is so vital in such a fast moving show.  But his Cristal is matched by Emma Morgan's Catherine, who's comedic ability both verbally and physically is stunning. But The Great American 80s Soap Opera is an emsemble piece of theatre and each character has it's own quirk of nature.  Summer Valentine (Daniel JJ Trimblin) is obsessed with remaining America's sweetheart , while Chad Knight (Ryan Clark) who plays her beau in the soap, is gay but hiding it as he doesn't think it will be good for his career.  Add to this an actress Lexi Lane (Rebecca Ryder) who wants to be more than a bit part and an ex Disney child star, Rain(Bekka-Jane Milner), who is a typical dumb blonde and you have a group of characters more broken than their fictional counterparts.

By contrast you would expect the crew members to be more sane by studio executive Dick (Stu Reeve) is mad with the driving need to make money while writer Darren (Paul Worral) is simply mad. Assistant Molly (Nikki Chaambers) is the sanest of them all. Show director Aaron is driven down the path to madness at an extreme rate due to what is happening to his show.  Joe Slack is truly brilliant as Aaron as he declines into a raving maniac determined to destroy what he once created.

Writers Stu Reeve and Craig Hepworth have created a brilliantly funny script and Craig Hepworth's skilled direction has brought it all to life in a scarily vivid way.  Special mention must also be made of the superb video backdrops by Karl Burge.  In The Great American 80s Soap Opera Vertigo Theatre have returned to the comedy they do so well and it deserves every single success.

Details and for last few tix via https://www.facebook.com/craig.hepworth.33