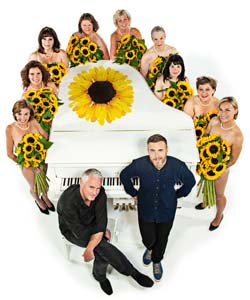 The Girls at The Lowry

I have to admit, when I went to see The Girls I thought that maybe they were milking the story of the W.I nude calendar a little, after all we’d had the film, the tour and the follow up calendar.

How wrong I was.  Gary Barlow and Tim Firth have breathed new life into the heart warming story of a group of friends who fought back against cancer by setting out to buy a sofa for a cancer ward’s relatives room and ended up raising millions.

The story has been turned into a musical with wonderful performances all round. It is no mean feat to fill the shoes of Julie Walters and Helen Mirren and all the other wonderful actresses who have disrobed in honour of the determined Yorkshire women but the cast manage this ably. Joanna Riding (Annie) and Claire Moore (Chris) lead this merry band through number after number.

Each cast member gets their moment in the sun, with the wonderful Debbie Chazen playing nervous Ruth to huge applause, Sara Kestelman showing that age isn’t a barrier as retired school teacher Jessie, Claire Machin capturing our hearts as single mum Cora and of course Vivien Parry playing the golf playing cougar Celia.

The ever wonderful Harriet Thorpe plays killjoy Marie with great conviction and the three younger cast members who play the children of these crazy ladies have fantastic comic timing and there a new storyline has been created which is interesting.

That isn’t to say the men don’t bring something to table. There isn’t a dry eye in the house as James Gaddas (John) strolls off over the Yorkshire hills for the last time and the three long suffering husbands are hilarious.

When it comes down to the grand finale and each lady bearing all, you can see the camaraderie between them as they egg each other on, maybe the veil of the roles slipping a bit.

In the interval I was lucky enough to speak to original calendar girls Tricia Stewart and Ros Fawcett. I had to admit to being a little star struck by these English heroines but was soon put in by Ros who informed me I needed to get out more.

Tricia is clearly a fan of the show and it was her eighth time seeing it, she was standing up and waving crazily by the end. I had to ask her if she had bought the cake at M&S, she laughed and said that was made up for the film but then smiled wryly and added that entries to craft fairs might be a different story.

The cast deservedly received a standing ovation at the end as the Lowry Theatre went crazy for them. In these dark January days as we hang in there for spring, it is a wonderful cheering night out to that us northerners don’t let anything get us down.

Details and to book.