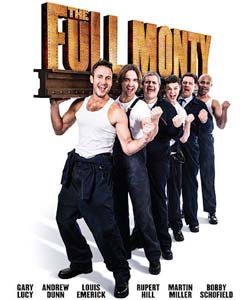 It's hard to think that it was as far back as 1997 when a film about a bunch of unemployed guys from Sheffield burst onto out cinema screens and into the hearts of movie lovers across the world. The film went on to win four Academy Awards as well as a whole host of other accolades. Skip forward to 2014 Monday night and it is the press night of the stage adaptation of Simon Beaufoy's The Full Monty at Manchester's Opera House.

Before the curtain went up the atmosphere was electric with a very mixed crowd of local celebs, couples and groups girls on a night out. The show starts to great applause and as soon as Gary Lucy steps onto the stage the applause and whistles return.

The stage set is striking and it plays an impressive part throughout the show. The stage is designed by Robert Jones and the lighting designed by Tim Lutkin and both elements play a massive part in telling the famous story. The story stays true to that of the film, charting the lives of a bunch of jobless guys who all worked together in a steel factory before being made redundant. It shows their hardship, their vulnerability and their friendship as well making reference to the politics of the era.

The script is peppered with great comedy which is delivered perfectly by the cast.

The cast are amazing with Gary Lucy playing the lead role as Gaz but it is the performances of Martin Miller as Dave and the young actor Fraser Kelly who plays Gaz's son Nathan than really steal the show. Many of the scenes are taken direct from the movie, from the famous job centre line up scene to the famous finale of the full monty which had the audience in a frenzy.

The show is a perfect night out, ideal for office night outs, birthdays and of course hen nights. It is filled with laughs and wonderful performances from the cast. If tonight's standing ovation is anything to go by, this you is going to be a massive hit.