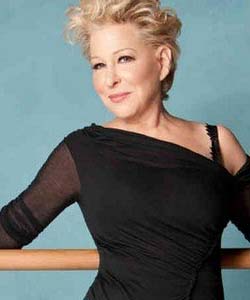 Affectionately known to us as The Divine Miss M, songwriter, actress, comedian, and film producer Bette Midler took to the stage at Manchesters Arena on the Saturday of Sparkle Weekend.

In a career spanning almost half a century, Midler has been nominated for two Academy Awards, and won three Grammy Awards, four Golden Globes, three Emmy Awards, and a special Tony Award. She has sold over 30 million records worldwide and along with that has also received four Gold, three Platinum and three Multiplatinum discs.

Canal St Online was there too..

Saturday night at the Manchester Arena saw a Broadway and Hollywood legend, that is the force of nature Ms Bette Midler.

In Manchester for her first time in some 35 years and boy does she know how to put on a show.

The Divine Interventation arrives on stage in a tiny pink mini-dress, looking and sounding youthful and full of energy, not bad for a 69-year-old. She quips: "We're here to lift your spirits like a boob job for your soul."

"I have resurrected more oldies than Viagra", announces Bette, which leads seamlessly into songs from her most recent album,'This is the girls' her homage to girl groups of the sixties.

Then cue her upbeat version of Tell Him, complete with the Staggering Harlettes in fabulous fringed costumes,which she then followed with a stunning and emotional version of TLC's Waterfall.This was to be the first example of her legendary ability to extract every ounce of emotion from a song lyric.Just one of here hallmark traits.

She then emerges from a birdcage with corset and tail feathers(well she would wouldnt she) for Bird in the Hand, the format for her hiarious Sophie Tucker tales.

We are then further treated to a full on Hocus Pocus witch for I Put a Spell on You.And as for what spell she's going to put on us all here? Cackling away she says: "I'm going to eliminate football altogether from Manchester".Well you can imagine..

Images flash on screen as if they're fresh from her mobile phone of a succession of her unlikely bed fellows. There's Jeremy Clarkson "he went from 0-60 in 0.5 seconds", she quips; Andy Murray "I was his favourite ball girl"; through to Jamie Oliver and even Nigel Farage and Margaret thatcher, Bette adding: "to be fair I thought it was Meryl Streep."

Introducing one of her best-loved song The Rose she announces: ""I know you're all going to want to sing along to this one... Please don't. There's only room for one diva in this room."And the crowd love her all the more for it. She ends on an undoubted high with that infamous ballad from her movie Beaches, The Wind Beneath My Wings, and it's truly moving to see her perform the song live.

"I don't know why it's taken me so long to get here," she tells a very 'diverse' audience and genuinely seemed moved by the standing ovation from a Manchester crowd in awe of this most talented,unique performer.

The setlist for Manchester included I Look Good / Do You Wanna Dance? / I Think It's Going to Rain Today / I Put a Spell on You / Yakety Sax / Bird In the Hand / a personal favourite,the Rolling Stones Beast of Burden.Spring Can Really Hang You Up the Most / The Rose / From a Distance / and the powerful Lorraine Ellison classic, Stay With Me.

So after 2 solid hours of tireless entertainment,we were then treated to a first encore: Wind Beneath My Wings.

Was that is? Should we head up the mountain of stairs? Not at all.

Bette Midler then brought her entire entourage of wonderful musicians and dancers back on stage to be named individually and appreciated accordingly.Boogie Woogie Bugle Boy then struck up and finished this most memorable of evenings off with a theatrical bang.

One lovely final touch,was here final appearance,solo, to thank the full to the rafters arena audience for making her feel so welcome.We all believed she meant it too.

To book for other tour dates.