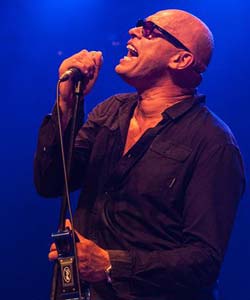 The Christians at Waterside Arts

The Christians enjoyed huge acclaim in the late 80's & early 90's both in the UK & Europe & often confused people with their name.

It is just the brothers surname & no religious connotation! Headed by lead singer Garry Christian (who still very much deserves the Daily Mirror's description as having "one of the finest voices in pop") who has only gained in vocal stature (& wit) over the years!

As he promptly arrived on stage,the charismatic Garry  informed a packed house that we were getting 2 halves of 45 mins each and that we were to hear songs from the new album 'Speed of life'aswell as all the hits from some 27 years ago.

Thats exactly what we then were treated to.

'Where Do the Children Play' by Cat Stevens,set the tone for the evening,followed by classics like 'When the fingers point'and 'I Shall Be Released'.

The beauty of many of their most memorable hits has always been the 'protest' element in the music.

Great examples include 'An ideal world',Forgotten world' and a personal favourite 'Hooverville'. All were part of the set on the evening.

Garry has over the years developed an ease on stage which somehow transfers in to the music itself.This easy style also helped him to deal with some over zealous audience members who can best be described as 'not rights'..Indeed my only issue with the night was the number of blokes in the standing only section,all on their mobiles and seemingly thinking they were at a football match.

This apart,the evening was hugely enjoyable,enhanced as ever,by the friendliness of the team at Waterside Arts.

Summer 2015 sees the release of their new album as well as a nationwide tour.

For more info about the group.