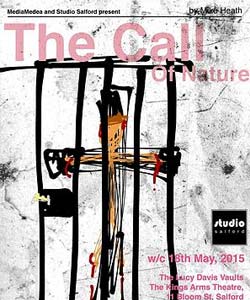 The Call of Nature

Do you like your theatre intimate? Like to see the whites of the actors eyes? Then 'Call of nature' is definitely for you.

A hedonistic mix of Sex and Religion and the tug of war between them,together with a layering of hard drugs use provides you with the basic plot of this new piece of writing by Mike Heath,performed last evening in the Vaults of The Kings Arms in Salford.

There can be no doubt that this play challenges its audience(limited to just 20) from the outset.Indeed the opening scene is set in a subterranean,smoke filled nightclub that we,as the audience, are a part of.The 3 main characters are 'enjoying'each other,having just apparently met.

We are then invited through to an adjacent seating space were the action continues in the dingy flat of the our only female Gaby.Its clear from the start that she has woven an intricate plan to bring her 2 male characters,Adam and Abe, together..Literally.

Its difficult to detail this see sawing plot without giving too much away,but essentially,Girl meets boys,entraps them with drinks and drugs and sets up a sexual liason whilst under the influence,initially with all 3 involved,but finally with just the 2 men.You get the drift.

All is then made clear as the secound act progresses.Past relationships are admitted,remorse expressed and one of the central themes,forgiveness explored.

The final appearance of the 4th character,Jesus on the cross,brings this powerful new piece,full circle.

Great performances too from the quartet.

Gaby played by Laura Danielle Sharp is minxy,manipulative, but ultimately good and captures all shades of her role with great strength.

Darren Langford is cocky,macho and sexually challenged and also gives a mature performance as the guilty Adam.#eyecandy

Nathan Morris is wide eyed and torn between his faith and his constant struggle with homosexuality,which he plays engagingly and deftly.Another strong performance.

The Call of Nature is a clever.witty,challenging play and will undoubtedly go further beyond its premier in The Vaults.

Not for the faint hearted,(who may feel uncomfortable with its content and intimacy),but if neither bother you,we strongly encourage you to try and get a ticket for its limited run.You will not regret it.