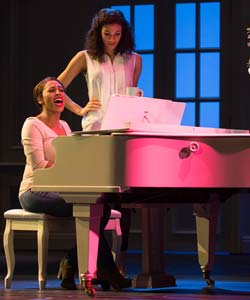 Everyone knows the smash hit romantic thriller movie of 1992 which won countless awards and grossed $411 million at the box office. For many the soundtrack to the movie was the soundtrack to our youth with the Whitney Houston tracks being firm favorites all over the world. How would this classic movie transfer to the stage? Would the Thea Sharrock directed show capture the hearts of the audience in the way that the movie did? Well tonight is the opening night of The Bodyguard The Musical and the much talked about show has attracted the local celebs as well as a full house.

The show starts suddenly with a rather alarming gunshot and opening scene which really gets your attention as well as a couple of screams from the audience. And then on to the opening number, we are treated to a high energy, concert style performance of Queen Of The Night complete with stunning dancers, flames, smoke, lights and the fantastic voice of Rachel Marron (Alexandra Burke). The opening number is a total treat and really sets the pace for the show. The set, designed by Tim Hatley is stunning with great attention to detail and fantastic lighting. It really feels like you are watching a movie as it changes so quickly taking you from scene to scene as well as using video technology too.

The story unfolds staying true to the movie but with added tracks from the Whitney Houston catalogue which works a treat. Some of the legends finest tracks are added to the story and each one fits perfectly, nothing feels forced and it’s a perfect tribute. On top off all that we are treated to not just Alexandra Burke’s fine voice but also that of Melissa James who plays Rachel’s ill fated sister Nicki.

Back in 1992 Kevin Costner played Frank Farmer, a role that made him an international heartthrob.

Today the lead male role is played by the dashing Stuart Reid who delivers on every level. His character is believable with his charm. masculinity, devotion to Rachel and in parts comedy.  The karaoke scene which closes the first act is a real gem. The show has its dark moments which are executed perfectly with the audience clearly spooked in parts. The cast excel in the cabin scene which works really well and moves you perfectly.

The show is great fun, a perfect tribute to a musical legend and a fantastic night out. It finishes with on a high with a full cast performance of I Wanna Dance With Somebody which the audience loved. The Bodyguard is a must see show so make sure you catch it whilst it’s in town.

For more info about the show or to book.