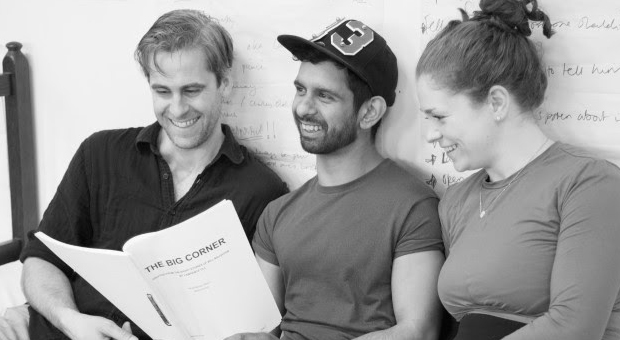 The Big Corner at Bolton Octagon

The Big Corner craftily combines episodes from several of Bill Naughton’s short stories in a semi-disjointed way that jumps forwards and backwards in time, sometimes obviously, sometimes less so. The play takes us back to what people assume was a more innocent time (when a twopenny pie didn’t cost fourpence for example), but in retrospect not a lot has changed: people went dancing and paired up for one night stands; unwanted pregnancy occurred; people took up with others’ spouses; growing up was just as painful as today.

The cast comprises 5 main characters. Bill/Billy/Will/William (Dan Parr), the main one, opens the proceedings by warming up the audience a bit, after which we meet his best friend Spit (Mitesh Soni), who has only one lung and is thus excused school (but can quote Shakespeare at length), and Alfie (Harry Long) his second best friend. The other two characters are Jenny (Lauren Samuels), Billy’s future wife, and May (Jessica Baglow), Jenny’s friend. At first they double up as Billy’s mother and other mates who all hang around “The Big Corner”. Spit and Alfie also double up as other characters later on.

Billy comes from a fervently Catholic family, and his prayers to the various saints in general, and to Mother Mary in particular, give rise to some gentle humour.  In an elongated scene where he loses his week’s wages in a coin tossing scam, he prays so fervently that you really believe that Mary has helped him out. It was hilarious and those who have a religious (Catholic) upbringing will nod sagely in recognition of his sufferings.

Life after death is discussed – which triggers Spit’s early soliloquy. Sex (solo and plural) is discussed, and Alfie offers up his sister to show Billy what hers looks like. He also tells Billy about some chaps who meet in the market hall who don’t “bother with women”. It was all going on, even in Bolton.

Fast forward then to Billy and Jenny’s marriage in Blackpool, where she’s frustrated that he’s brought Alfie on their honeymoon, but Billy doesn’t see it’s a problem. How could he leave his second best friend out of the most important day of his life? It’s very well done.

Rewind again, and we’re back to the Big Corner where Billy is chastised and catechised by two nuns (very amusingly played by Spit and Alfie in habits) incensed at his new found carnal knowledge. Fast forward again and Billy and Alfie are in a dance club. Alfie ends up with May, who is persuaded to take him home. Billy also scores but it involves finance. Alfie and May’s evening is put to a swift end when her aged grandmother (played by Spit doing an excellent impersonation of Old Mother Reilly) interrupts them. Billy ends up paying but leaving without consummating the evening, after taking pity on his partner’s circumstances.

Fast forward once more and we find out how Billy and Jenny meet in the spinning mill, where he is warned by the gaffer not to womanise. It later turns out that the gaffer has an invalid wife and May is pregnant by him. Fast forward again and we see how Billy and Jenny are coping with married life. Jenny is pregnant and they are penniless. Alfie appears again but it’s a very different story now with Jenny. It’s the last they see of him.

Rewind and we learn why Alfie is Billy’s second best friend after Spit dies in an accident involving home-made racing carts (and some audience participation).

Fast forward for the final time and we see Billy and Jenny 30 years on. They’re well settled into their marriage now and the child has grown up and gone. Jenny breaks the news that Alfie has committed suicide and hands Billy a letter, which he reads tearfully, unable to understand Alfie’s death, and still unaware that he was cuckolded by him all those years ago.

The roller coaster finally stops and we come full circle in the final scene, where Billy is left all alone, serenaded by the others, reflecting ruefully on Alfie and life after death, life in general, and how relationships evolve as life progresses.

It’s the last production at the Octagon for 18 months before it closes for a major refit and goes on tour.

More details can be found here.