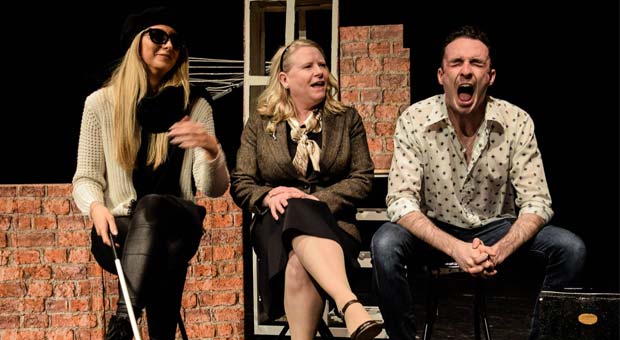 The Betting Shop, written and directed by Stevie Helps, and staged by No Egos Theatre Productions, premièred at the Aldridge Studio on the 10th of January. With the 15 minute interval it’s 90 minutes long (although it overran by about 30 minutes) and, given the brief details on the Lowry website beforehand, you could be forgiven for thinking it might be  a comedy. It has a large cast of 20, some of whom double up on roles, and some cast members were making their professional debut.

In the event it’s not a comedy, although there are some good exchanges. Instead, it scratches the surface of addiction (gambling, alcohol, drugs) and the effects on those afflicted and on those around them, taking in dementia, rape, adoption stigma, unemployment and homelessness along the way. It’s a lot to cram in.

The first half is largely a supported monologue, where skateboard carrying Harry (Martin Sleight) acts as a narrator, supported by the rest of the cast in a series of vignettes. The betting shop itself , which is about the only fixed performance area, is run by Bet and Fred (Linda Meacher and Paul Kenney) who have hearts of gold. The joke continues later when they employ Coral (Becky Kershaw).

The second half is more convincing, perhaps because everyone seemed to have relaxed into their roles a bit more.  It’s rather darker too, as various strands from the first act start to come together. The structure is much the same, although Harry is now more part of the performance rather than pushing it along. This works better. There are some strong performances, notably from Rosie (Barbara Ashworth) and Bet, when events from 45 years ago are brought under the spotlight.

With a longer run The Betting Shop might establish itself better, but if you’re quick there is a second performance on January 11th at 8pm.

Also, the Play returns on 6th Feb and is a pay what you feel it deserves? With all profits going to the Homeless

For more about Egos Theatre.