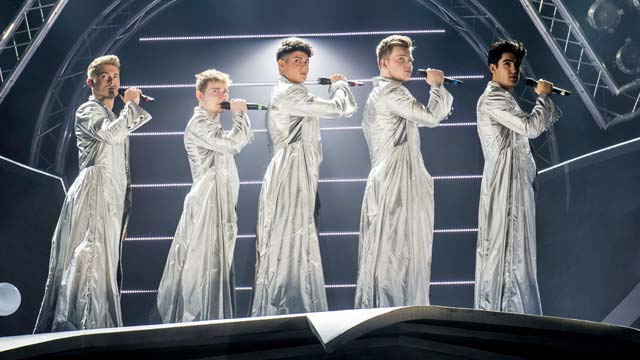 The Band at Opera House Manchester

The Band at the Manchester Opera House

This Take that musical has been all over social networks for some time now. The fandom behind it has been incredible, with fans making repeat visits, and the ‘band’ in the show voted for by the public via the BBC talent show, Let It Shine.

The comings and goings of the Take That members would make an interesting plot for a musical, but instead Tim Firth has written a book revolving around four women, who look back at their lives. The one thing that bonded them as teens was ‘The Band.’ It’s apt that these five guys are nameless, as they act like a Greek chorus, always on the background. It works as a comic device, but it also means that they come across as more bland than band.

The fans, who bond over a million love songs of their favourite five lads, are well drawn by writer Tim Firth. Rachel Lumberg is centre stage as her namesake, and she has enough comic timing and genuine emotion to carry the show. Alison Fitzjohn is also brilliant as Claire, a woman with regrets and facing very real issues.

The songs are shoehorned in, and on the night I attended fans loved this. The problem is, it means that elements of the central storyline feel rushed to get another song in. Five to Five have the vocals, and their harmonies are excellent, but because they lurk in the background like the narrator in Blood Brothers, the personalities that make bands like Take That so popular, are missing.

If you are a fan of Take That, you will love this show. But, I’m not convinced that it will have the staying power of Mamma Mia! Why? Even though the characters are interesting, the soundtrack to their lives is delivered in a workmanlike fashion. You long for the Mamma Mia style treatment of Voulez Vouz, where the original song is changed and turned into a party anthem. Instead, here these classic songs are crooned and it feels more like a Westlife musical because of that.

A fun night out for fans, with some great brilliant representations of women, but not as good as the Dancing Queen of jukebox musicals.