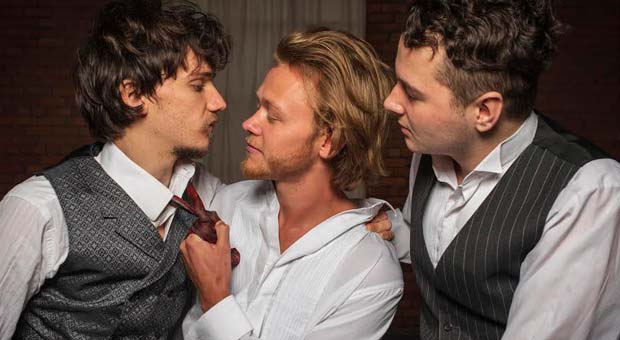 The Adhesion of Love

The Adhesion of Love, which was sadly on for one night only at Salford University’s New Adelphi Studio, tells the almost unknown story of a group of Bolton men and their devotion to the American poet Walt Whitman, and how one of them went to meet him. It’s brilliantly executed by a cast of seven, with some doubling up on parts as locations dictate. It’s extremely well researched, and, luckily, it’s being performed a few more times at other venues (see below).

The structure of Stephen Hornby's play is clever, falling into three main parts. It’s almost in sonata form as follows:

Exposition: The group comprises men with multiple social backgrounds. It’s headed up by Wallace and meets at the Eagle Street College in Bolton. Wallace is hooked on Whitman’s poetry and he instills this in the others who attend the meetings. There are gay undertones from the start, where friendship is masking deeper emotions. They initiate a correspondence with Whitman who responds.

Development: Wallace takes a trip to America to meet Whitman, who encourages him to be truthful to himself about his inner feelings. In his time there he has a sexual awakening. This is in 1891 though, and news of a man being imprisoned for sexual activity with another man almost pushes him back into his shell – but not quite. Whitman is dying though, and their parting is poignant.

Recapitulation: Back at the Eagle street College, it’s clear that the meetings have taken on a new meaning for the group. Wallace and his “friend” Johnston finally acknowledge some furtive groping from years back. Others acknowledge the new order of things rather more robustly.

It’s a measure of the group’s devotion that a letter would have taken a long time to reach America, and for a reply to reach them. This is in pre-internet 1891. An email exchange today wouldn’t have had the same outcome, still less an exchange via social media. The play brings this forgotten group of men back to life in a moving and very endearing way, and full marks to Stephen Hornby for writing it.

The actors are all excellent, and casting Whitman as a semi swami-like figure is a touch of genius.

Fittingly, The Adhesion of Love can still be seen in its real location: