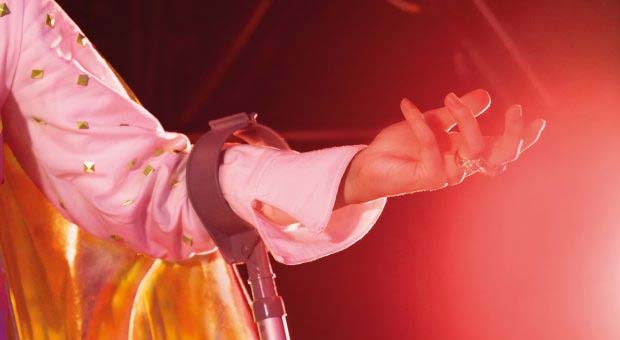 Thank you very much for MIF

The subject matter of Thank You Very Much, which premiered tonight as part of Manchester International Festival, would be hard to imagine, let alone stage. Clair Cunningham, who conceived, wrote and directed, took her inspiration from Elvis tribute artists, and this is what it’s all about. On another level though it’s about overcoming the rather bad hand that life has dealt you – either via escapism or exhibitionism.

It’s performed by 4 people who have varying degrees of mobility – from being able-bodied to having only one leg – and it’s certainly a thought provoking piece. If it was being performed in New York it would most likely be off, off Broadway, so tonight’s location (the Ukrainian Cultural Centre in Smedley Lane, north Manchester) was spot on. There are voice overs from male and female Elvis tribute artists, who swell the cast numbers – albeit invisibly – providing vocal backdrops. In addition there is audience participation, both en masse and solo, and those who were picked on individually more than rose to the occasion.

Each performer takes us through the movements that Elvis used, from the lasso, through the shoulder twitch, his stance, his gait, and, of course the pelvic thrust. In their own ways each one then describes how they use these to make people want to stare at them, rather than just being stared at because of a disability – taking control and becoming objects of devotion rather than scorn.

Claire (the “quadruped” as she has two crutches, which she uses to amazing effect) demonstrates how Elvis moved on the balls of his feet, Tanja (the “tri-ped” as she walks with two sticks, having abandoned her prosthetic leg a long time ago) demonstrates his step/step/thrust walk to remarkable effect. Daniel (a biped who walks without sticks) showed us the electric wire movements where it was as if Elvis was having semi-spasms because of clutching some. Vicky is the first one to change into Elvis gear and walks us through the clothes, belts and the subtlety of his smaller gestures and movements, and later gives us some cape action.

It’s a remarkable performance, and all the more so given the ambulatory constraints that Claire, Tanja and Daniel have. Towards the end where all four start out doing their own thing and ending up (somehow) on the raised podium stage, it’s as if they’re all being given convulsion therapy, eventually slowing the movements down to the almost indiscernible. You simply can’t take your eyes off them. It was macabre and beautiful at the same time.

We end the show with Claire singing Can’t Help Falling in Love With You, but I won’t give away how she performs it. Let’s just say Mama Cass would have been proud.