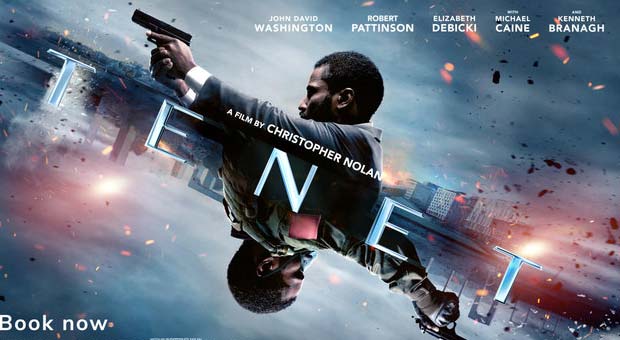 How do you save the world from something in the future?

The film follows Washington as “Protagonist” who is armed with one word (Tenet), and tasked with saving the world in a mission that will unfold in something beyond real time. Not time travel. Inversion.

It may seem as though a film that centres around the potential destruction of the world may not be what audiences want to see in the midst of a global pandemic, but Nolan’s bespoke spy-thriller makes Tenet a true escapist dream that leans far into the world of time and physics - topics broached in much of his filmography - and is gigantic in scope, scale and science.

With such a strong cast it’s inevitable that we see fantastic performances throughout, though Debicki in particular shines as an art dealer stuck in a loveless, abusive marriage with a cruel, dangerous arms dealer (Brannagh) - a role she is certainly accustomed to after her turns in Widows and The Night Manager - but never phones in. She will next be seen as Princess Diana in Netflix’s The Crown.

Washington and Pattinson make a cool pairing, akin to Finn and Poe of the most recent Star Wars trilogy, which naturally had me wondering if we’ll ever see an LGBTQ+ protagonist in these high-budget, bespoke thrillers in the near future?

What stands out in the film most of all are the visual effects. Working in spaces that are beyond time as we conceive it, the world in which the film plays out is part memory, part prophecy, so the use of visual effects to complement the incredible cinematography and beautiful locations only encourage that edge-of-your-seat feeling that’s been missed from visiting the cinema over much of 2020.

Tenet is certainly the perfect kind of film to return to the cinema for. With screenings in 4K, 35mm, 70mm and IMAX, Nolan has equipped cinemas with a plethora of viewings experiences that will appeal to everyone from the nonchalant action fan to the film connoisseur.

FYI, you might have to watch it a few times before it makes complete sense...