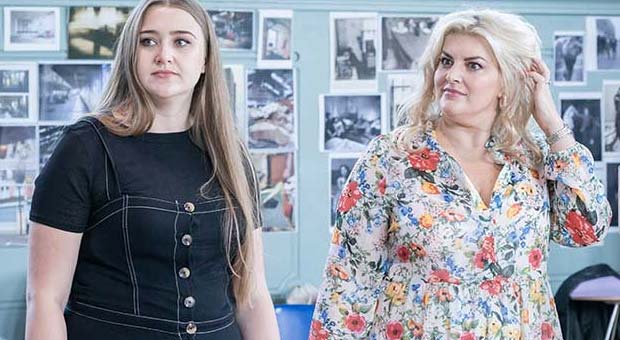 Taste of Honey at The Lowry

A Taste of Honey

Set in 1950’s Salford, A Taste of Honey is Shelagh Delaney’s career defining play, written when she was just 19. An explosive kitchen sink drama of its time, it shocked its audience with the story of a teenage girl pregnant through an affair with a black sailor’. When, after proposing, he heads back to sea, and with her mother away on an extended honeymoon, she shares the family rooms with a homosexual art student. Delaneys’s writing is second to none – sharp, witty and grittily northern. In an era that inspired Tony Warren’s Coronation Street, this is about the strength of northern women – resilience in the face of adversity, but vulnerable behind the make-up.

In this National Theatre production, directed by Bijan Sheibani, the staging is dark and moody. Hildegard Bechtler’s design perfectly captures the essence of the era from dingy backstreet boozer to dank, dark lodging rooms. Jodie Prenger is excellent as Helen, the mother too easily swayed by love. Fans of her musical talent will not be disappointed - from the smoky jamming at the opening to the live jazz vocals intertwining the story, the use of music (with an on-stage trio of bass, keys and drums) is particularly inspired and really adds to the atmosphere. Sheibani successfully brings out the humour of the script; however, whilst essential to smile in difficult times, the grittiness is diluted. Daughter Josephine (Gemma Dobson) is too bolshy in the first half, and her lack of innocence loses the shock of her situation, however she comes into her own in Act Two as she becomes a mirror of her mother.

Whilst the issues raised - class, race, gender and sexual orientation – may not shock today, A Taste of Honey is still a powerful play of family tensions and the northern powerhouse that is woman. A striking portrayal of 50’s life, this is a classic piece of British theatre. It may be leaving Salford this weekend after its initial opening run, but if you find yourself in one of the cities on its tour, I recommend not missing the chance to see it.