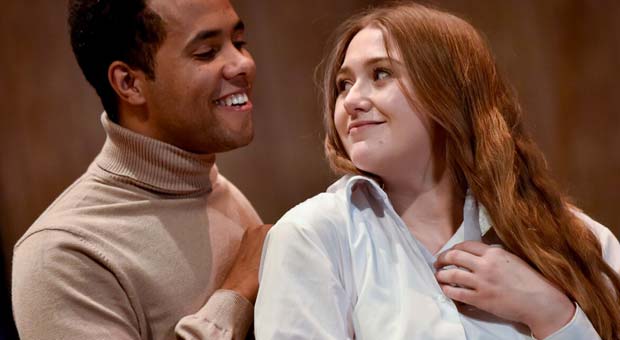 Taste of Honey at Oldham Coliseum

Depending on which sites you consult, Shelagh Delaney was born in either 1938 or 1939, and she wrote this play at the age of 18 after sitting through a performance of Terrance Ratigan’s Waiting for Godot, or Variation on a Theme. She thought she could do better, and succeeded, writing A Taste of Honey in ten days. The drama takes place in her native Salford, and in it she breaks the mould of how women and the northern working classes were usually portrayed - which was much the same how Noël Coward portrayed London’s East Enders – as cap doffing serfs who knew their place.

Delaney never married, but always insisted that the play wasn’t auto-biographical. It confronts several of the 1950’s taboos – teenage pregnancy, single motherhood, homosexuality, and even miscegenation. The drama unfolds in rapid fire dialogue, mainly between the play’s two central characters.

Jo, an 18 year-old school girl with a suppressed artistic talent, lives with her alcoholic and all-controlling mother in a shabby single bedroom flat with shared facilities down the hall, in Salford. Helen keeps them afloat by befriending gentlemen with a bit of cash.

During one such encounter, which ends in marriage to Peter, Jo is left home-alone and befriends Jimmie, a black sailor, by whom she becomes pregnant. After he deserts her, her friend Geof, a homosexual art student, steps in to take care of her.

Helen returns, after being thrown out by Peter, and in turn ousts Geof in what could be a latent maternal instinct kicking in or perhaps because she even now, can’t bear to lose control over her daughter.

At the very end, on learning the child will be black, Helen also departs, leaving Jo, who doesn’t know that Geoff will not be back, all alone to fend for herself.

It’s a stark tale of gritty living in Salford. Or, rather, it should be. The director (Chris Lawson) chooses to play the first half mainly for laughs. The script does contain humour, but it’s not of the laugh out loud type.

Jo’s softer side comes out when she’s with Jimmie (Kenton Tomas), but it’s not until they are left to their own devices over Christmas and she realises she’s unlikely to see him again – as proves to be the case – that her performance hardens into what the role should be.

The second act opens with Geoff having moved in. Jo is pregnant, and Geoff’s slightly camp domesticity is now the order of the day. He mops, dusts, bakes etc., and just about manages to keep things credible. In Salford in the 1950’s, life for a homosexual art student was probably difficult, and having Jo as a ruse – he even suggests marriage – is exactly the path a lot of gay men chose.

Half way through the second act the longed-for grittiness finally appears. Helen’s return breaks up the cosiness, and Peter’s arrival banishes it. The deliveries here are sharp, merciless, and calculated to hurt, and they stay this way until the end. If only it had started out like that.

Details and tix are here.