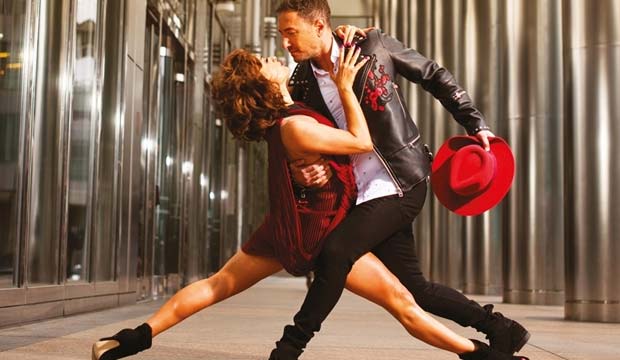 Tango Moderno hits Manchester this week and it’s a dance spectacular. Helmed by Strictly favourites Flavia Cacace and Vincent Simone, the show takes us through all styles of dance we’ve grown to love over the years. Unfortunately due to a back injury, Vincent Simone was unable to appear but Flavia was backed by not one but two dancers, as Vincent would say, it takes two men to replace him. He did send his apologies via Flavia, especially to the ladies he knew he would be disappointing.

The first replacement was Leonel Di Cocco, a professional Argentine Tango dancer from Buenos Aires. At first he seemed a little careful and I feared that the chemistry that was clearly lacking would affect the show but he warmed up in the later numbers and by the end, the dancing was superb. The show definitely took a step up in terms of chemistry and tempo when the second male lead, Pasquale La Rocca, took to the stage to partner Flavia. An Italian world competitor he ably took on jive, cha cha and ballroom dances, it wouldn’t surprise me if we don’t see him as a professional dancer on Strictly at some point.

The show itself had a loose storyline of Flavia and Pasquale as cupids, making love happen for the young dance troupe in a series of scenarios. It felt a little odd at times, particularly as one girl was clearly feeling the love from a male dancer behind a door. The audience were of the older generation and there was a few looks and grumbles at this. I would say it’s sometimes wise to remember who you sell to.

Further numbers were trying desperately to be hip including one parody of dating apps such as Tinder and another about how obsessed we are with mobile phones, for me these missed the mark. It felt like when you saw your teachers dancing at the school disco to the latest hits, awkward.

When the show really came to life was when Flavia and one of the leads were performing solo. I can only imagine that this gap will widen when Simone takes to the stage. Flavia is a wonderful dancer and it is an absolute pleasure to watch her take to the dancefloor leaving the rest looking unnecessary and filler.

I couldn’t review this without mentioning the two singers, Tom Parson and Rebecca Lisewski. Tom had a great stage presence and could slip from modern hits such as Lukas Graham’s “7 Years” to the Percy Sledge classic “When A Man Loves A Woman” and back to Ed Sheerin’s “Shape of You”. As for Rebecca Lisewski, she not only hit every note perfectly but her rendition of “Three Handed Woman” brought the house down, she was excellent.

The rest of the dance troupe was great but, for me, lacked personality amidst these strange routines that had been cooked up for them.

I would definitely like to see the show again with Simone back on stage but that isn’t to take away from Flavia’s ability to hold her own, she really did step up to the mark and gave us more than enough entertainment