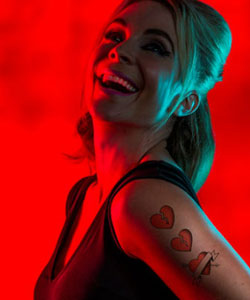 The Royal Exchange never fail to surprise with their choice of christmas show and it’s programing of ‘Sweet Charity’ seems perfect, wonderful and an appropriate choice, especially as the world prepares for Donald Trump’s America.

Transforming the Royal Exchange into the hustle and bustle of New York City, Derek Bond returns to the theatre to direct the Tony-nominated Broadway hit SWEET CHARITY triumphantly reclaiming another vintage Broadway musical of the 1960s. Bursting at the seams with instantly recognisable hit songs (Rhythm of Life, Big Spender and If My Friends Could See Me Now) and stunning choreography by Aletta Collins this show is created by the team behind the 2014 sell-out success Little Shop of Horrors.

Charity is a dancer in New York City. With a heart tattooed on her arm and always looking for love, she has a habit of falling for the wrong man. I wonder how many audience members can relate to that? Nevertheless, when she meets shy tax accountant Oscar it seems as though Charity’s luck might have changed and as Kaisa Hammarlund (Charity Hope Valentine) sings ’If My Friends Can See Now’ with such credibility, we all believe in her aspiration.

The band is phenomenal and from the opening brass sounds of ‘Big Spender’ you know you’re in for a good evening.

Hammarlund, is utterly mesmorising and provides an outstanding performance. The standing ovation she received at the end of the evening was richly deserved. She plays the role with vulnerability, excitement and glamour so much so, that she has the entire audience loving her from the start.

But it’s the whole cast who add to the strength of this production. Casting Daddy Brubeck (Josie Benson) as a female church preacher seems a bold move but as she closes ‘Rhythm of Life’ you can’t imagine it done any other way.

You may ask (like the dance hotessess that Charity Hope performs with) ‘There’s Gotta Be Something Better Than This’. I would argue, absolutely not!