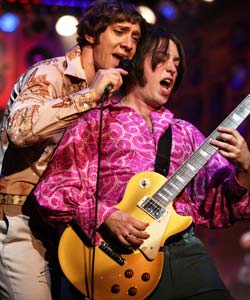 Jukebox musicals are everywhere, enabling music fans to hear the songs of Carole King, The Four Seasons and Abba. Beautiful, Mamma Mia and Jersey boys are three of the best, but there are also some ropey ones. So what sets this one apart?

Well, the music of The Kinks for one. Lola, All Day and All of the Night and Dead End Street already have fully formed narratives. So, it the songs never feel clumsy and writer Joe Penhall treats these numbers with respect. So, they each have a purpose.

The cast too, are all excellent, delivering performance filled with energy and enthusiasm. Not one of them looks as if they are going through the motions. I have seen juke box shows, where the songs are slavishly performed and galloped through, in order to get the finish line.

That’s not the case here. Ray Davies, lead singer of the Kinks is played by Ryan O’Donnell and he fully explores the great man’s insecurities, as well his eccentricities and remarkable talent. He does this respectfully and, he is quite magnetic to watch, particularly during the concert scenes. Mark Newham plays his wayward brother – Dave, and he explores more than ‘Dave the Rave’ – the heavy drinker and womaniser.

We see talent again and a sense of rule breaking, but his turn is also tinged with regret and disappointment. The character’s cross dressing is glossed over as comedic though, sadly. Women are portrayed as fawning fans, whatever their profession. Ray’s wife Rasa though, is beautifully portrayed as someone wanting to be an equal, and her feistiness an indifference towards Ray’s fame is really welcome.

Lisa Wright imbues this character with a strong sense of musicianship and frustration and she does this incredibly well, as the role is underwritten, but she gives more than is on the page. Sunny Afternoon is a great British musical, in that the music is incredible, and nothing here feels half-hearted.

It is such a strong show, that even if musical theatre is not your thing, you won’t be able to ‘stop sobbing’ by the time the finale comes, as it is a show filled with emotion, due to this talented cast.

Sunny Afternoon is at the Opera House until 27 August.