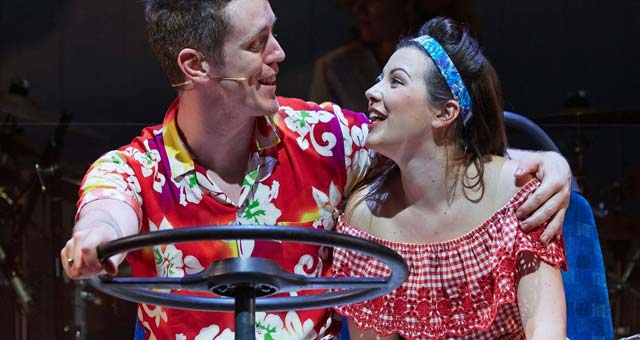 We’ve all sung it when we get in the car to the airport. I’m sure a million taxi drivers are sick of hearing it. But it was the unlikely venue of Bolton Interchange where the audience were in fine voice, belting out Cliff Richard classic, “We’re all going on a Summer Holiday”.

Little did we know the wonderful evening of feel good entertainment that awaited us. One of the jewels in northern theatre’s crown, the Bolton Octagon, gave us their take on the 60s film classic, Summer Holiday and what a take it was.

When watching a production to review you try to take note of the good and bad elements of the performance but I can honestly say there were no bad bits at all. An interesting and immersive start sees the initial scene being played out in a cordoned off area of the bus terminal, much to the confusion of passengers waiting for their bus home. It is at this early point that you realise you are dealing with a tight and brilliantly produced cast.

Once the business of the scene is over, we all crowded onto buses with our allocated cast member and enjoyed a drive through Bolton whilst singing along to some of Sir Cliff’s best known songs. I suppose my only issue here was it was one cast member for both decks so things were a little disjointed. That is a ridiculous gripe but I’m struggling here.

Once we got to Victoria Square there was another scene as the lads encounter singing group Doh-Ray-Me who have broken down and they decide to give them a lift to Athens. More musical numbers ensue before we are led to the Bolton Octagon itself for the rest of the performance.

What is great about Summer Holiday is that all the cast members also play instruments, so as we took to our seats, the cast were on stage, playing rock n roll to keep us in the mood. It is then the performance proper starts with child prodigy pop singer, Barbara, escaping from her overbearing mother, Stella, as a stowaway on the bus.

The pace of the story is perfect and the musical numbers are brilliant with many of the audience members singing along where they could.

There is no stand out performer, the company clearly enjoy working with each other and this spills out in bucket loads. Michael Peavoy who plays lead character, Don, is energetic and engaging, ably backed up by Luke Thornton as Edwin, Alexander Bean as Cyril and David Heywood as Steve.

Perfect foil for these lads on tour are singing sensations, Doh-Ray-Me who consist of Isobel Bates as Mimsie, Sarah Workman as Angie and Robert Jackson as Al. Canal St Online interviewed Robert during rehearsals to get his take on the brave move of the Octagon to swap the gender of a character (originally Alma) and have a gay couple in there for no other reason than its 2018. There were a few murmurings when it was obvious where the story was going but not one person batted an eye. That has to be progress right there, before our very eyes.

Eleanor Brown as Barbara is sweet and funny in equal measures and you can’t help but feel sorry for her under the crushing hand of child star mother from hell, Stella. Barbara Hockaday, who plays this gorgon, is quite simply put…wonderful. She had the audience in stitches as she tried scheme after scheme to get her daughter back on track and was a joy to watch. As was poor Jerry played by Greg Last, the agent and stooge of Stella who finds himself in all sorts of predicaments. The scene where they played Italian buskers was one of the funniest I have seen in a while.

So there you have it. A big old splurge of nostalgic comedy and song which had everyone up on their feet at the end and belting out songs, feeling closer to a concert than a night at the theatre. I can honestly say not one person left that theatre without a smile on their face and what more can you ask for?

Read our interview with Robert Jackson.