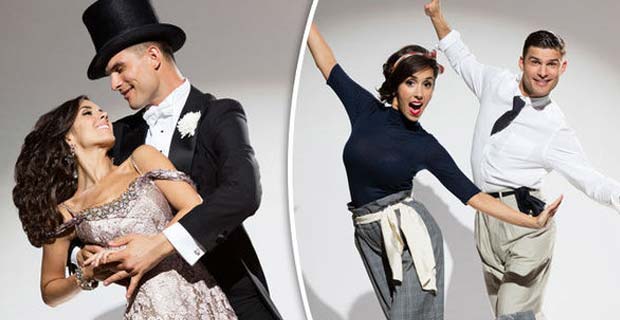 To say they went like the clappers is an understatement. This week the Bridgewater Hall was transformed into a dancefloor as Strictly aces Aljaz and Janette took us on a rollercoaster ride through their favourite cinema moments in their latest live extravaganza, Remembering The Movies.

Hot on the (Cuban) heels of the successful Remembering Fred tour where they recreated some of Fred Astaire’s best moments, they threw things open this time to a whole host of movie classics starting with The Greatest Showman and travelling through Singin In The Rain, Saturday Night Fever, Romeo and Juliet and an amazing tribute to 007 himself.

Aljaz is a joy to watch. He never misses a beat and stands head and shoulders above anyone else on the stage. The way he uses his body to create amazing shapes is second to none, he never wastes one move. As his dance partner and wife, Janette is so short, she has to delegate ballroom duties to dancer Ash-leigh Hunter who is more suited to his height.

But Janette fans need not despair, the leading lady has plenty of opportunities to shine with a wonderful mash up of Diamonds Are A Girl’s Best Friend and Material Girl, Moulin Rouge style as well as proving she can sing with the best of them as she takes on Mein Herr from Cabaret flawlessly.

If I had to find fault, I would say that the sections where the duo speak to the audience were awkward and overly scripted. It would be nice to see them ad lib a bit more and to get to know the couple behind the choreography. Aljaz did have a moment where he spoke about his love of dance but the rest of the time it was borderline cheesy. Having seen shows with Pasha and Anton & Erin, they have a much stronger bond with the audience than Aljaz and Janette did. This is a shame because the audience were literally eating out of the palm of their hands and as they worked up to the breath-taking finale, fans were screaming like it was a pop concert rather than a ballroom dancing show.

There was no band, the show relied on taped music but the two vocalists on stage were OK although maybe a little overwhelmed by the sheer variety of songs they were expected to master, from Whitney Houston to Aerosmith. The dance troupe were also great but you really missed when the stars of the show were off stage. The show has over 250 costumes so changes were frequent but the frenetic pace of the almost 3 hour epic meant they weren’t off stage for long.

It was great to see two seasoned pro’s testing their limits, yes the Latin and ballroom of Strictly was there with full effect but they expertly went into jazz, contemporary, tap and ballet to show that there is a lot more to these two than the confines of a dance television show.  One of the better Strictly spin off shows with something for everyone.