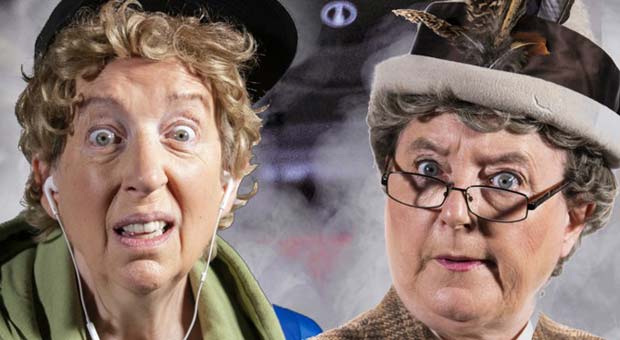 Strangers on a Train Set

Strangers on a Train Set by Lip Service Theatre, which is currently running on-time at Oldham Coliseum, takes a loving poke at the world of railway modelling and the result is great fun. It’s written and performed by Maggie Fox and Sue Ryding, who appear on stage in various guises, as well as in some clever film projection.

The clever stroke is how the characters they’ve authentically created in OO scale come to life in a series of (almost) joined up sketches.  These just about manage to stay on the rails, although the occasional slips are glossed over and ad-libbed into the performance. The stroke of genius is how they can be present on film at the same time as themselves on stage, and the interactions between the modellers and the modelled is very skillfully done. The costume changes are very quick too.

The first sketch is their interpretation of Murder on the Orient Express, with characters from differing times included on the (train) set, as the modellers aren’t that purist. This takes in a sketch within a sketch involving games played on a phone which left me a bit bewildered but it went down well with everyone else.  Following this we have their take on Brief Encounter in which Laura’s clipped diction brought the house down. Next off is The Railway Children, with audience participation, during which the handout we were given as we entered plays an integral part. Then Brief Encounter comes back. It’s all in the best possible taste.

The performances are excellent, both as the train modellers and the little people they’ve brought to life. Anyone who’s been to a model train exhibition will recognize the characters they portray, where the people operating the layouts do sometimes fight over who is going to be in charge. It’s extremely funny, and there was a fair smattering of modellers in the audience who appreciated the nods to their hobby.

Strangers on a Train Set continues at Oldham Coliseum until September 14th, and a nice touch was how the performance was localized for this short run, but then departs for other locations. See www.lipservicetheatre.co.uk for full details.