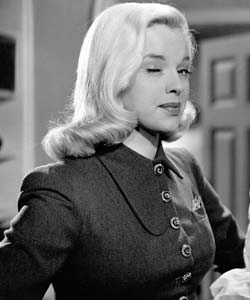 Stockport Plaza is an amazing venue especially considering that only 15 years ago it was almost derelict. Approaching it today you are presented with a huge white 1930’s facade towering into the sky adorned with neon illumination.

The Plaza has been through a process of restoration and rebuilding to restore to its original luxury and glamour. Inside you will find a fully restored theatre with deco style features, an auditorium capable of seating upwards of 1200 people and the original Compton Organ that truly encapsulates the spirit and atmosphere of 1930’s Super Cinema.

Should you arrive early for a show or happen to be in Stockport and fancy a bite to eat, I can recommend the Art Deco Restaurant at the top of the building (open Monday – Saturday 10am – 4pm).

Tonight I am attending a screening of two British 1950’s comedy film starring Diana Doors at possibly her most seductive, both were made by Adelphi films. Interestingly the Adelphi collection of productions is preseently being restored by the BFI and several can be purchased on Amazon [http://www.adelphifilms.com/purchase-dvds.asp].

The first film was ‘Miss Tulip stays the Night’ (1955) here we find Diana playing the young wife of a thriller author, who maybe suffering from writers-block.

Not wanting to spoil the film for you it is a light hearted piece and Diana is clearly the star. The story, about a murder, moves along at a reasonable pace but many of the characters are not well formed and the ending must have been dreamt up, under pressure, late one night in the local pub...

This said, Diana is a joy to watch in the production and certainly oozes confidence and allure.

The second screening  ‘Is Your Honeymoon really Necessary?’ (1953) is a much better film and it is an adaption of stage play, a very common practice in the day. It is classic farce and it takes place almost entirely on one set an American Air Force Hostel (read 4 star apartment) apparently in Grosvenor Square, London.

Anyone who has seen farces on the stage will recognise the set-up and the possible consequences of the characters coming and going and doors opening and closing.

The story is a clever one about an American airman returning to the UK with his new wife, only to discover that he maybe still be married to model named Candy (played by Doors). Again she looks stunning from her first appearance, concealed in a bath under a foot of foam, and she is simply the sizzling screen siren, mischievous and fun but played with heart.

The cast features some very well known British actors including Sid James, David Tomlinson and Peter Butterworth all soon to become major stars in series such as the Carry On films.
The Stockport Plaza is always looking to present interesting events and films that appeal to a wide audience, so while there will be the Christmas Pantomime you should keep any eye open for these occasional one-off events.

And to be honest seeing these films, and their like, on the big screen is much better than on any home screen and certainly the theatres plush styling and the organ being played before the film really helps set the scene for such classic screenings.

An aside note about Diana Doors:
she died in 1984, at the age of 52, and there is something of a mystery about where all her money was. Reportedly she left money to be found by way of two coded messages.

The BBC’s One Show has recently produced a short piece about this (its delivery is somewhat slow, but it worth it for the interest) click here to watch the piece.