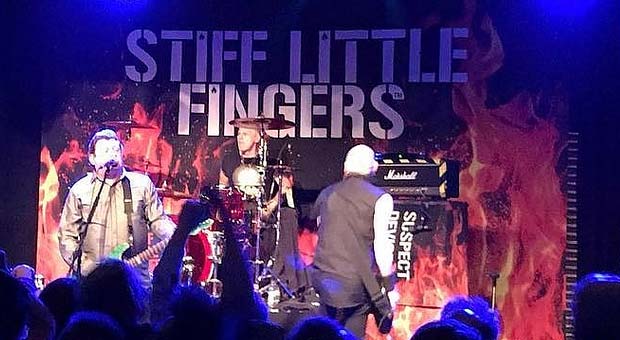 Stiff Little Fingers at the Academy

Stiff Little Fingers are a punk band formed in Belfast in the 1970's and had hits alongside bands such as the Clash and Damned. They split in the 80's and after some reunion shows late 80's have toured extensively since and have a huge loyal appreciative fanbase.

Their style is energetic punk, with lyrics both political and personal, writing initially about the Troubles in Ireland  ( Alternative Ulster, Suspect Device ) teenage disaffection,  and in more recent years more personal themes such as depression ( Jake Burns lead singer has been open about his challenges with this ) They were initially championed by John Peel after sending him a tape of 2 songs.

Supported by Eddie and the Hot Rods, another band formed mid 70's in Essex, with a rock/punk style and some well lived hits ( best known - Do Everything You Wanna Do )

They had planned not to tour again after 2018, but couldn't resist the offer of a tour with SLF, and this will be the absolute last chance to catch them live.

Both bands have a great reputation for a lively show, with great audience participation, including some pogoing at the front for those still able to flex those knees joyfully at the sound of their youth.

This is what we thought..

Another well attended gig at the large capacity venue in the Academy. Busy right from the moment we got there and the support hadn't started. Bar was easy to get served at ( not so inside the auditorium as it was so packed generally ) and staff as always, were bright and cheerful.

One of the most packed gigs I have seen at this venue! Absolutely rammed from early on. SLF usually play at a packed Ritz and are clearly now able to fill a venue of an extra 1000 fans.

Lots of enthusiasm for the support band, Eddie and the Hotrods ( punk/rock band from the 1970's ) who are undertaking their absolute final tour supporting Stiff Little Fingers, so a great opportunity to see another band we had missed out on in our youth.

They were full of energy from the start, plus a lively contribution from the audience. Lots of die hard fans singing all the words to every song.

Even the sound guy got a chance on vocals and there was some harmonica contribution from another member of the crew.

Clearly all having fun and enjoying themselves.

The response to Gloria ( Van Morrison ) was massive, with what seemed like the whole venue singing the chorus, and the band ended a fantastic set with their most famous song - Do Everything You Wanna Do - which the crowd almost lifted the roof off to!

Stiff Little Fingers also did not disappoint, still have massive energy and went right into their set with the audience bouncing immediately. Great to see all ages attending, including groups of Dads with their lads. They are still pulling in crowds and seem to be more youngsters attending every time we see them. Jake Burns the lead singer is still writing songs with a message, including a heartfelt one about depression which is becoming a favourite and brand new Sixteen Shots, about a young man shot by police in Chicago, and and the old punk raw energy underpins it all.

The well known material is loudly and warmly received and all the words are sung by nearly everyone in the room, clearly a well loved band. The two guitarists having a huge amount of appreciation from those present and loving what they do. Rounding off with Alternative Ulster just made it a perfect gig. So much positive energy and warmth for this band in the room. Can't wait for the next tour!

See what else is on at Manchester Academy.