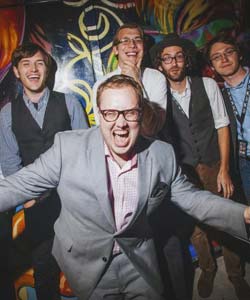 St Paul and the Broken Bones

The 30th January saw us head down to the O2 Ritz to watch the powerhouse that is the Alabama-based soul octet St Paul and the Broken Bones.

During this passionate and energetic show, the religious energy that once had a teenage Paul Janeway training for the clergy is evident; masterfully rousing the crowd convocation-style with his howling vocals, whilst his band provided classic soul, jazz and funk-infused backing.

On the British leg of their tour for the critically well-received September release Sea of Noise, St. Paul and the Broken Bones put on an effortlessly exuberant performance. Frontman Janeway notes the increased crowd size - this is their second visit to Manchester and they have packed the room, keeping the audience abuzz throughout the duration of their set.

Despite the relentless energy and American showmanship, when commenting on the significant size of the crowd, Janeway is evidently humbled by the fact; “We must have had about 20% the size of this crowd last time we were here, I honestly don’t know what happened but I’m loving this!”

Whilst the red suit-clad showman’s theatrics are the most compelling aspect of this performance, Janeway also knows when to let the rest of the band shine; with a demure “I’m gonna keep my mouth shut”, he disappeared, allowing guitarist Browan Lollar to showcase his funk-laden solos. A wonderful flute solo saw the stage bathed in blue and the room stilled to absorb the sheer skill displayed on stage. However, the energy was back following the band’s gorgeous hit I’ll Be Your Woman.

This is a band who’ve mastered the art of dynamics - one moment having the crowd clap along to setlist staple from their debut Call Me, (a slick, upbeat number), Janeway howling with a James Brown-esque soulful energy, and the next segueing into sensual, bass-driven instrumentals; they’re certainly one to watch.