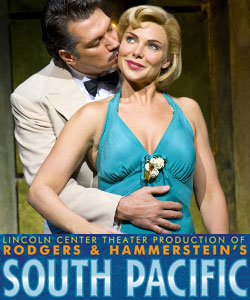 South Pacific at The Palace

Set on a tropical island during World War II, this is the sweeping romantic story of two couples, threatened by the realities of war and by their own prejudices. Its portrayal of Americans stationed in an alien culture in wartime is as poignant today as when it first thrilled audiences in 1949.  Considered one of the finest musicals ever written, the score includes Some Enchanted Evening, I'm Gonna Wash That Man Right Outta My Hair and There is Nothin' Like a Dame.

Even though I am a fan of musicals, I had never seen South Pacific before, therefore did not know what to expect.  I was amazed at how well it lived up to the high regard the musical is held in, with a stellar cast and production.  The singing was perfect, drawing on a whole range of emotions and conveyed well the feelings of each scene.
If you have never seen South Pacific before either, you'll be pleased to know that you can easily follow the story and will become hooked wanting to know what happens next.

Alex Ferns as Luther was a little difficult to understand with his scottish/american accent, but played his character well.  The star of the show has to be Loretta Ables Sayre who played Bloody Mary, who had a lovely singing voice and brilliant "Tonkinese" acting.  The character of Bloody Mary is very endearing at first, with an under current of a slightly darker character who wants the best for her daughter.  Loretta was in the Broadway cast of South Pacific during its first revival since 1949 and she makes it worth while to go and see this musical on tour.

South Pacific is a classic musical that both new and old fans would enjoy.  Therefore, I would recommend getting your hawaiian shirt on and a flower necklace and head down to the Palace Theatre, Manchester, for a truly tropical experience!

South Pacific is on at the Palace Theatre until Saturday 5th November 2011.

Reviewed by James Masterman for canal-st.co.uk