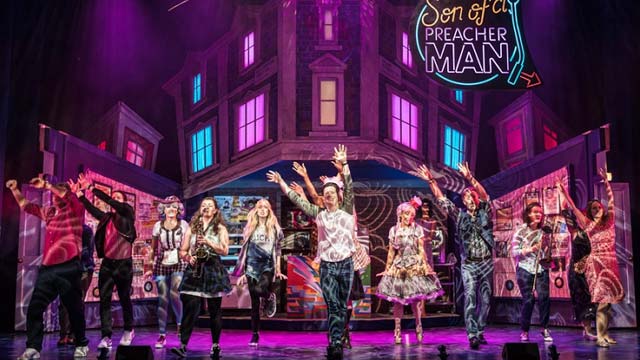 Son of a Preacher Man

Put another dime in the jukebox, baby! This famous Joan Jett lyric is very apt, as Manchester has two new musicals, both of which plunder a back catalogue, in search of hooks and dramatic content. At the Opera House, it's Take That and here it's Dusty.

For a good jukebox musical to work, it needs a good set of songs, but it also needs a sturdy book. Otherwise, it all feels like an excuse to stop boring us, and get to the chorus.

Warner Brown has managed to contruct a story which is incomprehensible, flabby and strangely lacking any emotion. I say strangely, because, as you have guessed from the show's title, the music is Dusty Springfield's greatest hits.

The narrative is so slim that it revolves around three disparate characters; Kat (Diana Vickers), Alison (Debra Stevenson), and Paul (Michael Howe) who are in search of advice and meaning to their lives. They look for a preacher man, but guess what? They find his son! And so it plods on, navel gazing, ridculous sub plots, and cardboard caricatures, all designed to be sellotaped to a song.

Diana Vickers is way too good for this, whenever she sings, there is a vulnerability that comes across which is not on the page, and she is brilliant. Stephenson drowns, but it's barely her fault, her role as a former teacher who has lusted after a pupil is laughable. She does what she can with such risible material.

Craig Revel Horwood directs and his usual flair is missing. His penchant for musicans/ performer is evident again and it distracts. But, it's the way the songs are used that jars. "I Just Don't Know What To Do With Myself" features characters singing to a chair!

Add a Michael Walliams style cleaner and a tortured middle aged man who resembles David from Cold Feet, and you end up with a musical in desperate need of a story.

For the poor audience, there is nowhere to run and judging by some of the walkouts at half time, many of them were thinking What Have I Done To Deserve This.

Jonathan Harvey has penned Dusty, a biographical musical about Miss Springfield. On paper, this looks like the one to watch out for. My advice is wait for this one.

Son Of A Preacher Man is at the Palace Theatre until 30 September.