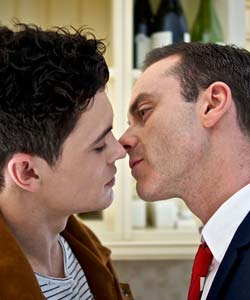 Soft Lad was shown at Salford Lowry Theatre this week as part of the Poutfest Tour and is Leon Lopez’s feature film directorial debut. It is a triumph of a story looking at repression and how it can have devastating effects in a family.

Set in Liverpool, the film centres around David, played by EastEnders star, Jonny Labey, who is a 22 year old gay lad embroiled in a love affair with his sister’s husband, Jules, played by Daniel Brocklebank better known as Coronation Street’s vicar Billy.

Most of the action centres around this trio which is completed by Brookside actress Suzanne Collins. The script is brave, pushing the characters into unknown territory as David falls in love with Sam forcing Jules to realise his true feelings. As this is a debut feature, there are moments where the script feels a little clunky and possibly one draft away from perfection but this is a minor gripe. In terms of performance and sheer look, it is faultless.

All three characters shine which is a great testament to Lopez’s directorial skills as well as the solid cast he has assembled. Labey is undoubtedly the star of the show as the troubled David who is finding his way into the gay world but this by no means detracts from Collins and Brocklebank’s performances as the doomed couple. Brocklebank is a brooding anti-hero who shows enough vulnerability to make us sympathise with while Collins’ portrayal of Jane is emotionally charged as she desperately tries to discover why her marriage is failing, she truly comes into her own in the inevitable showdown which doesn’t disappoint.

Also mention must go to Craig Stein who plays Sam, the unfortunate soul who finds himself in the centre of this love triangle. He plays the part with surprising subtlety which works to give the viewer a refreshingly alternative viewpoint.

In a Q&A session following the film, Lopez confirmed that it was made for less than £20k and filmed in a week, with the cast all staying in the house where most of the action is set. This should be an inspiring lesson to any potential filmmakers out there and Lopez is definitely a name to watch out for, he seems to be overflowing with enthusiasm for his art.

Soft Lad will be available on DVD on 9th November 2015.