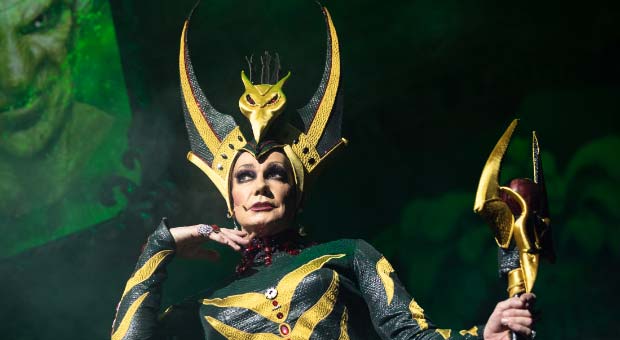 Snow White and the Seven Dwarfs

This year’s spectacular at the Opera House is the classic tale of Snow White, her quest for love, and life with seven dwarfs. Once again accompanied by my intrepid young reviewers – Zara and Noah – we eagerly awaited an exciting night of comedy, dastardly deeds and songs galore. The show starts with a bang and continues to explode throughout the night. The sumptuous sets, slick direction, crisp dance moves, impressive vocals and obligatory naughty jokes keep the audience wholly entertained from start to finish.

In a change from the usual charabanc of TV names, this is very much a star vehicle for Craig Revel Horwood. As someone who has never watched Strictly Come Dancing, I was anticipating an evening of unknown references, however, whilst there were enough moments to satisfy the most ardent of Strictly fans, they did not detract from the tight script, and worked perfectly throughout the show. Craig jokes early on that he would never win any acting awards – true! – but his stage presence and very impressive vocals more than prove his perfect casting. For a character that should be booed throughout, we couldn’t help but cheer his performance.

The production sees the return of two Manchester favourites: Eric Potts is wonderfully buxom as Dame Norma Crumble, with OTT outfits and a host of Northern put-downs; and Ben Nickless builds on last year’s show-stealing success, this year as Muddles. Once again, he plays the audience perfectly and has us in tears of laughter with non-stop jokes and hilarious impersonations. The comedic highlight was the Twelve Days of Christmas sketch, with mishaps galore – they may be rehearsed but are played perfectly and made for an hysterical 15 minutes.

With Zoe George’s sweet Snow White, Joshua St Clair’s bare-chested Prince Harry (of Hulme), same sex dancing couples, a huge flying dragon and a troupe of seven very Mancunian dwarfs (loved You Raise Me Up), this is a production written for Manchester. It knows its audience and hits every mark. A special mention to 8 year old Will who stole the show during the curtain song with his own put downs that left Muddles speechless! The magic of panto is once again shining down Quay Street.