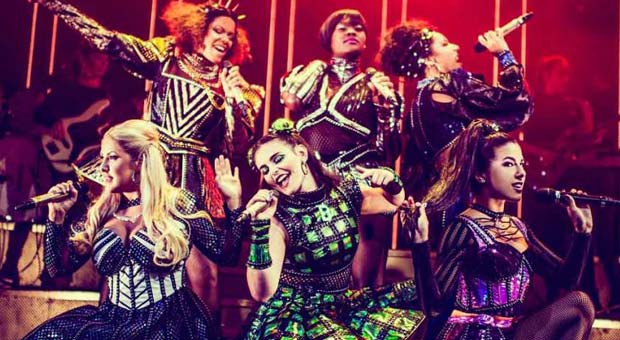 Six at The Lowry

After a hit residency at the Edinburgh Festival, the six wives of Henry VIII have taken to the road to tell their stories with 21st century sisterly sass-itude. This high energy pop concert introduces us to a different side of history through the eyes, and powerful voices, of 2 Catherines, Katherine, Anne, Anna and Jane - the spouses of the infamous monarch.

The pre-show high anticipation through the audience came as a surprise, but was completely validated by this excellent production. Great vocals, neat harmonies and slick direction packed so much into its pacy 75 minutes.

Two divorces and two beheadings haven’t stopped the girls bringing life into every second, as they compete (and bitch) a la X-factor to prove who should be crowned best wife. From the power ballads of Seymour’s Heart of Stone (Natalie Paris) and Parr’s I Don’t Need Your Love (Eccles-born Maiya Quansah-Breed) to the Berlin club scene-esque Haus of Holbein, each song generated sustained, rapturous applause. It’s funny, confident and clever - who will win the top spot?

Ultimately, as SIX become One, we’re on our feet and cheering loudly. This was an unexpectedly enjoyable, foot-tapping, sassy production that I might just have to go and see again. Go Girls!