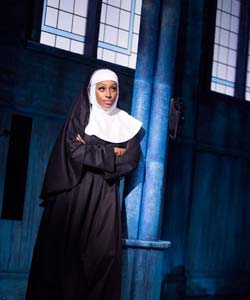 Sister Act at the Palace Theatre

Alexandra Burke made her musical debut in the hit show, The Bodyguard – based on the Whitney Houston movie, playing a diva. Here, she returns to the source material of a film, to play another diva and she is “Fabulous, baby.”

Deloris Van Cartier is on the run, she has seen a murder and needs to hide. So, she goes undercover as a nun in a very strict convent. This would be an easy task if Deloris was a shrinking violet, but she is loud, proud and loves bling and the material things that the nuns have kissed goodbye.

Karen Mann’s Mother Superior clashes with the material girl, yet the other habit wearers warm to her, as they realise she has the voice to “Take them to Heaven”, as their own choir needs help and fast.

Strictly Come Dancing’s Craig Revel Horwood is directing the show, and he does makes sure that each set piece is swiftly delivered. And he coaxes fine performances from the entire cast. The only sticking point, is that he has decided that most of the cast will play instruments.

Although, this works in other shows more suited to this format, it does not work here. There are some scenes, where the instruments such as guitars get in the way of the action and slow the piece down, as well as make the actors seem awkward.

Revel Horwood is on dance duties here too, and his choreography is superb, particularly during Eddie’s disco number. Eddie is the shy cop, who everyone calls ‘Sweaty Eddie’ and Jon Robyns plays him with ease. He is in superb voice and a great comic actor.

Alexandra Burke is second to nun, as her performance is as good as the many actresses that have played this role before. She has great comic timing and the vocal chops required to lift the roof off. I’d love to see her in something like The Color Purple or Dreamgirls next.

Karen Mann is also perfect as Mother Superior and her “Within These Walls” is superb and filled with emotion.

Sarah Goggin is a real scene stealer as the shy and awkward Sister Mary Robert, who has the voice of an angel. She and Burke have genuine chemistry.

During the concert scenes, the atmosphere is electric and the show really comes to life here. Burke leads from the front, but the entire cast are all in excellent voice. If only the musician/actor roles were dropped, this would be a perfect show.

As it is, Sister Act is a funny and heartfelt show with a great performance from a fully-fledged diva/musical star. Sister Act is at the Palace Theatre until 3 September.