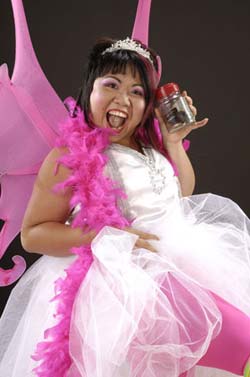 In the words of sinderfella, "if you're expecting swan lake you should probably f**k off early".

This bluntly sets the scene for the regions only Adult Panto at Manchester's Dancehouse Theatre on Oxford Rd.

Instead prepare yourself for an evening of foul language, vile costumes, hilarious singing and brutal banter. This panto breaks down all barriers getting up close and intimate, so if you like your personal space, best to avoid the front row.

That said, no one is safe as the cast often disappear into the crowd to pick their next victim. The choice of songs certainly has everyone up on their feet dancing and the vibe in the room is definitely that of any good party.

Vicker and Melton create a whole new meaning to 'ugly' stepsisters and although forgetting their lines on several occasions they never fail to entertain and draw the audience in. Greenwood and Bailey play a whole range of characters, some apparently in the wrong story but all adding splendidly to this rather bizarre but hugely entertaining production of a beloved classic.

Great also to see you Gaydio's Nicksy in a very different role.Equally entertaining as ever.

For full details and to book.Click here.