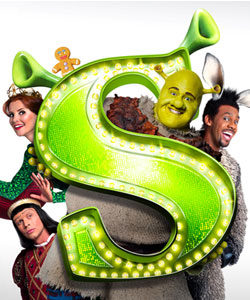 Over the past couple of years I have been lucky enough to attend many press events at both the Palace Theatre and the Opera House. There is always a great buzz with the anticipation of seeing a new show as it arrives in Manchester. The buzz around Shrek has been building for months and I was more than happy when the invite came through to attend the press night event.

The Palace Theatre was full of excited theatre goers, local celebs and of course lots of children in their Shrek ears and dressing up outfits all eagerly awaiting the curtain to go up.

From the moment the curtains opened we were all hooked. The staging is bright and bold, everything that a fairytale should be. As the story unfolds the staging quickly changes, transporting us quickly from scene to scene. There are some wonderful moments too. The final song in the first act is breathtaking and the opening number in the second act is one of my all time favourites as it is bright and so clever with the dancing rats and spell bounding routine. The scene with the dragon is pure magic and the finale certainly has the feel good factor. Although I do wish that the audience would of go up and joined in the fun rather than just sit there clapping along however the standing ovation was more than deserved.

Shrek has a sensational cast who all work so hard. The ensemble each play several parts which they do with great ease and with a fantastic wardrobe. Faye Brookes and Dean Chisnall have great chemistry as Princess Fiona and Shrek. There is great comedy timing with them both and Faye's voice is wonderful. Gerard Carey steals the show as Lord Farquaad bringing a touch of old school comedy to the production in the most delightful way. Idriss Kargbo has huge comedy shoes to fill as Donkey and boy did he filled them well.

There is a certain magical quality to Shrek, kids love it, adults love it. There are jokes for kids and a touch adult humour that is delivered so well, that kids have no idea what it is. The score is wonderful and clever, with little touches from other shows like Lord Farquaad's touch of Defying Gravity and a touch of Les Mis as well as maybe even a touch of Dreamgirls with the Dragon too.

If you only see one show this Christmas then it has to be Shrek.