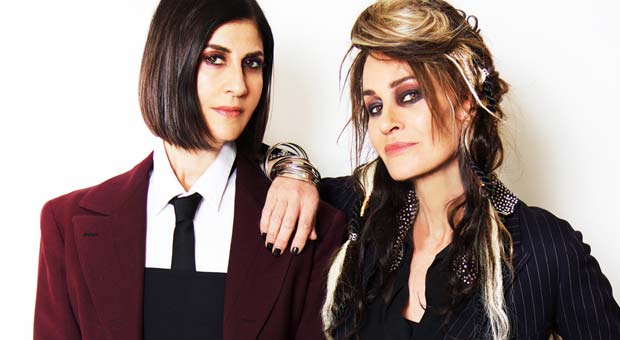 Back in 1992, Shakespear’s Sister ruled the roost with mega hit Stay at number one for what seemed like a life time and teenagers all over the country worshipping at their altar of gothicy angst. I was one of them, duly reporting to Manchester Apollo to see the two bedecked in sequins belting out their hits.

An unbelievable twenty-seven years later and Siobhan Fahey and Marcella Detroit were back in Manchester as part of the Shakespear’s Sister Ride Again Tour and I am pleased to say they are still brilliant entertainers.

From the first bars of Goodbye Cruel World to the final ones of Hello (Turn Your Radio On) they commanded the Bridgewater Hall. Only Shakespear’s Sister could say hello with a goodbye and goodbye with a hello. You keeping up?

It’s fair to say that Detroit didn’t always hit every high note but what she did present was a much more human and fragile version of her parts. Stay will always be the song everyone cheers the loudest for but instead of the power ballad of yesteryear, we were treated to a more intimate version which felt right.

If Detroit provides the musicality, then Fahey gives us the entertainment. She was all over the stage, bedecked in a white rhinestone cowboy suit. Having last seen her at the 2017 Bananarama revival tour where she looked a bit hemmed in by the other two, in 2019 she was free as a bird and dancing all over the stage which the crowd lapped up. She even did the Charleston for I Don’t Care.

The set list was a mix of old and new but it was the new stuff which felt the most powerful. Richard Hawley made a great appearance for their recent duet When She Finds You and their backing band were superb but the night belonged to Fahey and Detroit. The banter between them seemed totally natural and from where I was sat, I could see them hug each other when they were off stage. It’s hard to believe they have barely spoken since the early 90s, as Detroit said “They finally buried the hatchet, luckily not in each other”.

My only gripe and it’s a minor one, is that I didn’t feel the Bridgewater Hall was the venue for them. It would have been a totally different gig at the Academy or Apollo, the crowd felt a little reserved. I hope the reception they’ve had across the country on this tour will encourage them to write a new album and get back on the road because there is more to Shakespear’s Sister than we have seen.