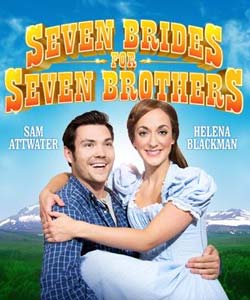 Monday night and your Canal Street Correspondent transported to the backwoods of Oregon in 1850, as even brothers seek seven brides at Manchester’s Opera House. Surprisingly, this musical was not originally a stage production. The story is a twee retelling of The Rape of the Sabine.  Set in Oregon in the mid-Nineteenth Century, it sees woodsman Adam (Sam Attwater) visiting the local town with the express intention of finding a wife. After a whirlwind romance (all of five minutes) local beauty Milly (Helena Blackman) agrees to marry him, and he whisks her off to his cabin in the woods to live happily ever after…
…except that the cabin is also home to Adam’s six uncouth brothers (save for the very sweet youngest, Gideon). Appalled at her fate, Milly nevertheless teaches the brothers some manners so that they can find their own wives and leave home. In a jolly twist, the brothers kidnap local townswomen and hold them hostage in the woods for several months until the girls become besotted and agree to marry the brothers.

The musical got off to a poor start, with a false opening.  Sam Attwater (better known for Hollyoaks and EastEnders) doesn’t quite cut it in the lead role as Adam.  His American accent slides off- course, he lacks stage presence and during his big numbers “Bless Your Beautiful Hide” and “Sobbin' Women” fails to shine particularly when compared with Helena Blackman (How Do You Solve A Problem Like Maria?) as his new wife the feisty Milly. Blackman settles well into the role and her tenderness is evident in the second act.
The evening really picked up with arrival of the brothers, and more so when these “ripped” woodsman got their tops off!!!!  The brothers, named in alphabetical order include some new faces who tackle their roles with energy and their dancing and gymnastics with gusto. Special mention to Jack Greaves as Gideon who simply dazzled.

What makes this production stand out is some truly incredible choreography, which principally arrives during a barn dance that sees the brothers compete with rival suitors. With over a dozen bodies on stage taking part in some energetic dancing involving axes, back-flips and manoeuvres on table-tops, it proves a thrilling routine that draws rapturous applause.

The hard working cast were let down by the production, which would not have been out of place in a pantomime. Scenery whizzes about in bewildering fashion. Pine forests sidle across the stage; log cabins descend from the flies and retreat into the wings. An immense avalanche rears up from nowhere. The technical issues do not end there.  There was a damaging false start, lighting cues were too-often askew at crucial moments, and mics were turned on and off with little regard as to which actor was actually speaking.  At times the actors were inaudible.
These technical faults were no fault of the cast whose commitment in the formidably demanding routines is cannot be overstated.