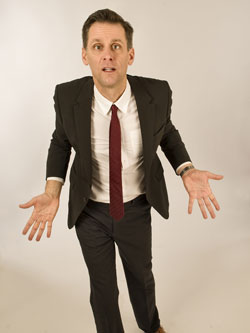 On sat 7th April scott was appearing at the Kings Arms in Salford, initially I thought this was a strange venue for Scott to do a gig at but the space upstairs is fab. Being an avid fan of Scotts I was disapointed that there were only 25 people in the audience, but those who were there were up for a laugh.

Firstly congratulations Mr Capurro it's the first gig of yours that i have been to where a member of the audience has not walked out !!
There were however long moments of silence, normally this is because of the shock value, however on this occasion i think it was because the material was old and been heard before. He still has an amazing banter with the audience and is very quick with his replies but come on scott  'does my bomb look big in this ?' is the oldest joke in the book.
I had a great night but feel new material is needed, i will defo return to the kings arms.

For details of other forthcoming performances at The Kings Arms..Click here.