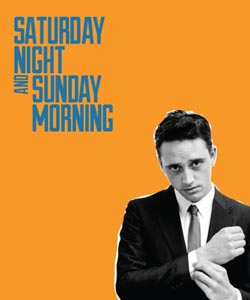 When Karl Reisz film of Saturday Night, Sunday Morning was released in 1960 it made quite a stir. Albert Finney played the films hero Arthur Seaton whose character could be described as an angry young man, with little to compliment him.

The story is set in 1950's Nottingham, an era when men are seen as bread-winners and women are almost confined to a domestic space or chores. It contains elements of domestic violence towards women which still convey the power to shock.

Reflecting the social thinking of the time it will certainly shock people who haven't read the book or seen a production of it.

This latest production of Alan Stillitoe book is extremely engaging with the actors delivering a strong and powerful performance.

Perry Fitzpatrick plays Arthur Seaton, a character whose life revolves around drink and sex without consequence and is having an affair with Brenda, a work colleague's wife.

One most powerful element within the play follows Brenda's successful attempt to miscarry Arthur's child. In the 1950's abortion is illegal. This scene is delivered as a wake-up call for Arthur and he appears remorseful.

However, Arthur's life continues in much the same vein, his affair with Brenda carries on and he takes her sister Winnie as a lover. This eventually leads to severe beating from Winne's husband's army friends.

Arthur's response to this beating is simply that it goes with the territory and he is unconcerned about it.

By now Arthur has met Doreen, a young woman, who he 'chats up' in a pub on her mother's silver wedding anniversary. This relationship develops and his lovers disappear from the story.

The play ends with clear intention of Doreen and Arthur's relationship, although there is a hint at future violence.

I would recommend that you see this play, or at least the original film. It is a gritty and hard story about a time in Britian's history when the rationing and the 2nd World War legacy are still very much part of people's lives.