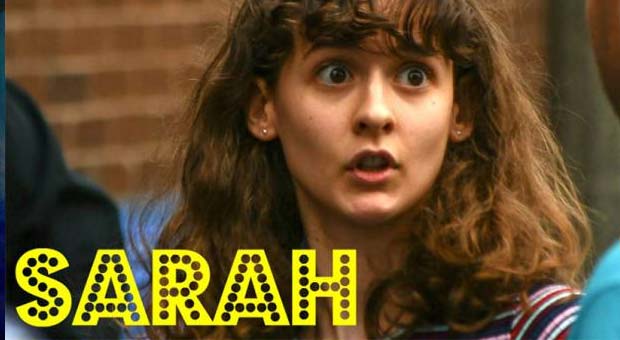 Sarah at The Lowry

Sarah, a new play written, directed and produced by Stevie Helps, premiered for a night at the Lowry’s Aldridge Studio on January 15th. It has a large cast, some of whom have only a couple of lines to say, and follows parallel timelines where older Sarah is on stage throughout, recounting what’s happening on the other side of the stage, where younger Sarah’s history is played out. The scenes are joined by vocal numbers which provide good links between them. It's not an easy play to review though without giving too much away.

There are two acts, both of which open as tableaux from which the characters come to life following an opening introductory number played and sung live.

The first has some genuinely funny moments and some serious ones. We open with the older Sarah in prison, being grilled by her former boyfriend’s mother who is trying to find out what happened all those years ago. On the other side of the stage we see younger Sarah at home. The main themes of this act are rejection, infidelity, trying to be who you aren’t, and not really fitting in.

The second act is altogether darker, and becomes darker still as the secrets of the past are revealed. The opening number here is Mad World, but You Always Hurt The One You Love would have been as good a choice, as the events of the first act lead to the inevitable end that until now has only been hinted at. As the programme says, someone is keeping secrets, someone wants answers. The twist is that someone already knows them, although these are only revealed via a set of Cluedo style eliminations, and perhaps only brought back to them by reliving the past.

There are strong performances, made all the more commendable given that some of the actors are students, and notable mention must go to Darah Jayne Lynch, Imogen Butler (older and younger Sarah) and Rob Butler (Andy). The LGB topics are handled objectively and amusingly, but Andy’s mental issues and subsequent descent are terrible to witness.

The programme also stresses the importance of talking to one another and making time for loved ones. What it doesn’t say, but the play does, is that sometimes we reject people for the best of reasons, such as trying to save them from hurt. The truth will out though, even if, as here, it takes time – when it might be too late.

Sarah is a good play and deserves to do well in a longer run. It would be good to see it developed further from a studio performance too. It’s certainly solid enough to survive.