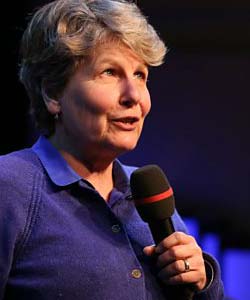 Humour is a wonderful thing ain’t it? It engages, it divides and has the power to unite us humanoid creatures together. But humour and politics is an interesting one. You might think that using humour to entice people to join a new political party is a risky business, but when you’ve got impassioned showbiz pro Sandi Toksvig at the helm, hey, play to your strengths right?

It’s almost a year since Toksvig quit The News Quiz and swiftly hopped aboard the politics train, founding the Women’s Equality Party. In that time the party has hit the ground running and on Wednesday night, Sandi Toksvig brought her live show Politically Incorrect to The Lowry. Part stand-up, part storytelling but very much a political juggernaut with transparent intention. There was no hidden agenda here and anyone who wasn’t expecting a political sales pitch, well, you clearly didn’t read the brief.

Toksvig commanded the stage effortlessly and struck just the right balance between politics and funnies. Navigating us expertly through crazy oddities of the past and present, each story somehow threaded subtly back to the underlying message - equality. Toksvig is a charming storyteller who can bring about laughter in the face of absurd and quite frankly shameful inequalities.

A shining example is the true tale of Lily Parr; a star footballer of her time who was as renowned  for her football skills as for her ability to chain smoke Woodbines throughout matches. In fact, women’s football during that era of around 1920 was so popular among audiences, it drew crowds rivalling their male counterparts. One game featuring Parr’s team, the Dick Kerr Ladies, drew a stonking crowd of over 50,000 spectators. So naturally, the FA decided to ban women from using fields and FA stadiums for 50 years. How lovely.

But this isn’t just about days gone by. Toksvig tells us that more recently, the Australian women’s basketball team have triumphed on the international circuit whilst their male counterparts have trailed. Despite this, the men’s team fly first class around the world whilst the victorious women fly economy. There’s so much to unpack in so many of her stories but this was a whistle-stop tour.

Amongst the politics there was a healthy dose of audience participation, namely a game of Whiff Waff (an early incarnation of table tennis for those who don’t know) and a good old quiz. She is the host with the most after all. There was a prize of a Women’s Equality Party mug and everything.

Herding it back to the mission in hand, Toksvig brought home the case for equality. It is everywhere at the moment, from the gender pay gap to sexism and discrimination. According to findings, if women were engaged to their full potential in the workplace, we could add 20 trillion to the global economy. That’s a pretty sturdy case.

What shined throughout was Toksvig’s exuding enthusiasm and sincerity for the cause. As she opened up the floor to questions, one audience member asked if she really thought the party could actually achieve their equality goals. The questioner sounded already defeated and Toksvig referred to her earlier statistic; it has been calculated to take 118 years for us to reach equality. Despite this, Toksvig remained chipper in the face of this terrifying statistic. She is an optimist and quite frankly, she has to try. Apathy is all too common and she has never been one to shy away. Toksvig described how 20 years ago, she was the first woman in the media to come out as a lesbian, and as a result received death threats and had to have police protection. A mere 20 years ago. Thankfully we’ve moved forward and who knows where equality will be in 20 years time, if of course we make a stand.

Whether or not you believe in the cause of Women’s Equality Party, if Toksvig had a take home message (aside from joining the party of course), it’s that if you are passionate about something, you should stand up and fight-the-fight.

For more at The Lowry.