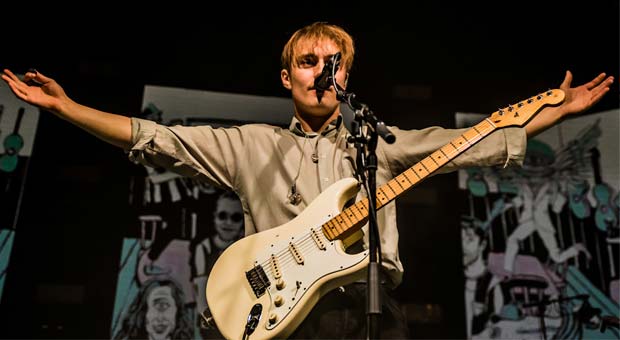 This young man from North Shields has previously been an actor, signed by a record label in 2018 and, judging by the size of the excited crowd at the Academy, has a large enthusiastic following in the North West. We were new to his output, save hearing one song on the radio previously, but very encouraged seeing the packed venue.

Very impressed by the skill and energy of Sam and the band, no warm up numbers here, a massive start which didn't let up, crowd totally loving it, singing along to pretty much every song.

Superb guitar work, powerful vocals, thought provoking lyrics of social commentary and an adoring crowd were a very heady mix. Fantastic atmosphere with no let up.

Background visuals were great too, lighting and sound were spot on as usual for the Academy.

We were treated to an encore of a couple of solo acoustic numbers from Sam before the band returned to finish the evening.

Thought I caught a hint of  Bruce Springsteen influence at one point, and was pleasantly surprised when part of the encore ( last song ) was a cover of Dancing In The Dark, which the crowd roared along to with joy.

Sam will be supporting Killers in 2020 and has 2 more shows at Victoria Warehouse in Manchester in March. Will definitely be seeing him play again.