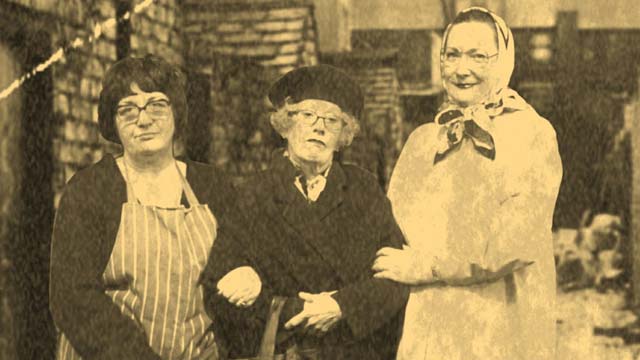 This is a kitchen sink drama. It brings back memories of Albert Finney in “Saturday Night and Sunday Morning” or Rita Tushingham in “A Taste of Honey” and so the feel and the décor is early 60's, with perhaps the added bonus of swearing and scatological jokes.

Humour is  however sadly missing in the home of a feckless Irish family with no prospects and no ambition beyond the next pint or bunk up. Queenie, the old mother, sits in front of the TV watching programs like “3-2-1” all day – which surely places it in the early 80's - whilst widowed Mary works to keep it all together with an overgrown schoolboy of a son, and the disapproval of sister Martha, who has a line of dresses Elsie Tanner would be proud of.

It is all a bit depressing. Inaccuracy and inconsistency abound, the heavy handed influence of religion in the period completely missing and humour is thin on the ground, unless farting jokes are your taste. Perhaps the author should have tried the script on his nan first?

The actors, however, do fairly well with a pedestrian script. There were several muffed lines, with delivery sometimes hurried and Irish accents were inconsistently maintained, but as a pastiche it worked. The use of the audience as a mirror to allow the actors to exaggerate facial expressions is a good idea.

In all, for a more accurate view of Salford life in the 60's and 70's and a good deal more humour watch some early Coronation Street, preferably before Martha Longhurst got the chop.