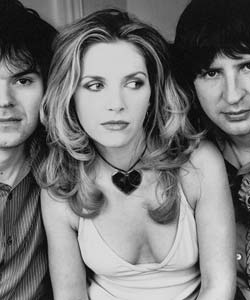 Saint Etienne at The Albert Hall

Saint Etienne are an English indie dance/indie pop band from London, formed in 1990. The band consists of Sarah Cracknell, Bob Stanley and Pete Wiggs. They are named after the French football team AS Saint-Étienne.

This week they played a rare gig at Manchester's Albert Hall and we were there to be transported back to the 90's..

Sarah, Bob and Pete sauntered onto the stage at Albert Hall to their 1993 single ‘Who Do You Think You Are?’ and this sets the tone for the evening perfectly. With no new material since their 2012 album Words and Music, the show is all about the 90s nostalgia of their distinctly British pop sound.

Clutching a mic stand adorned in fairy lights (this is a festive show after all), singer Sarah Cracknell asks “Who’s opened the sherry already?”, before performing a stripped back version of Chris Rea’s ‘Driving Home For Christmas’. Cracknell has never been noted for her vocal ability, but with the support of long time touring companion and backing singer Debsey Wickes - still rocking her signature 90s bob haircut - they dip into the band’s 25 year back catalogue and perform tracks ‘Lose That Girl’, ‘He’s On The Phone’ and ‘You’re In A Bad Way’.

Their biggest hit, a 1990 cover of the Neil Young track ‘Only Love Can Break Your Heart’, comes a bit too early in the setlist for me as it’s an obvious highlight, but is perhaps too obvious a finale. Nevertheless, the crowd absolutely love it and sing every word, and it’s moments like these that work perfectly in the stunning surroundings of the Albert Hall.

For the encore, Cracknell returned to the stage minus Bob and Pete - who she joked had “gone to the pub” - for a somewhat underwhelming tribute to the late Cilla Black with the song ‘If I Thought You’d Ever Change Your Mind’. All is forgiven however when the trio are reunited for the final song of the evening, ramping up the tempo again with ‘I Was Born On Christmas Day’ and getting everyone in the festive spirit!

For more at The Albert Hall.