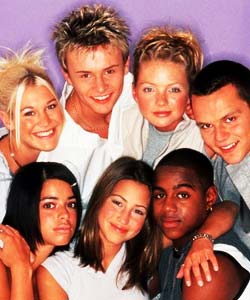 S Club 7 at the Manchester Arena

They only just got back together after a very long break, performing as a group for the first time in years on Children in Need.

Fans will be pleased to hear that S Club 7 have embarked on a comeback UK arena tour - aptly called Bring It All Back.

We were there on Fri night for their Manchester appearance and this is what we thought...

'S Club 7 are back with their “Bring It All Back Tour 2015” and they arrived at the Manchester Arena.

There ain’t no party like an S Club party, Tina was doing her dance, Jon was looking for romance, Paul was getting down on the floor, whilst Hannah was screaming out for more.  You got to see Bradley do his swing and Rachel do her thing, then you had Jo and she got the flow.

It was a wonderful trip down memory lane, with all the great hits from S Club 7 with modern and up to date twists.  It was a great performance and they certainly provided a lot of entertainment throughout to the arena.

The added bonus was that they didn’t just stick to S Club 7, they sang their own solo pieces including the top hits from Rachel Stevens.  Whilst making sure they included everyones favourite S Club 7 tracks, which further included their original music videos playing on the screens in the background.

The stage was camp and full of glitter, with energetic backing dancers.  S Club 7 showed they still had the moves, the voices and were certainly not the usual “reunion tour” that were now past it.  They felt as young and vibrant and fresh as ever. Whilst looking slightly older and more grown up, they can obviously still pull in the crowds and the magic spark they once held was back again.

S Club recognised their audiences would attract original fans as well as new.  They included hits from today such as Uptown Funk to their repertoire to keep a fresh feel to their performance.  They all sang live and showed they still have their musical talents, with Jo O’Meara hitting all the famous high notes.

Manchester Arena was a great choice of venue for their tour, it is a brilliant arena that certainly makes you feel safe and clearly very LGBT friendly and welcoming.

The Bring It All Back Tour 2015 is a definite must see, original and new fans, young and old, will all enjoy this tour equally.  They have pulled off a great performance and catered for everyone.  It has been a brilliant concert and we were thoroughly entertained'.

Still time to see them with details here.