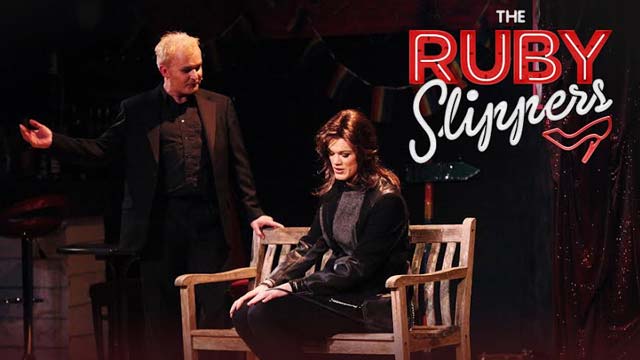 When I was asked to review the London production of The Ruby Slippers, it was with trepidation.  As it has been many years since I have been to a drag show, I was not sure what to expect.  I slipped on my Doc Martins and entered the unknown.  The show which was on a limited run in London was both entertaining and deeply moving at the same time.  The set was imaginatively designed, giving a feel of actually being in the bar.

Beyond the layers of camp were messages of tolerance and understanding.  James Rogerson, playing Raz, the owner of a slightly seedy drag bar was entertaining and deeply sad at the same time.  Jamie Paul as his flat mate Ryan, kept his secret until the audience were bursting to find the truth:the fact that he was planning a transition.  Debra Redcliffe as Ryan’s mother, Helen, was supportive of the issue.  Unlike his flat mate, who found it very difficult to come to terms with the fact his secret love was soon to transition.  Ryan had clearly known from an early age that he was non-binary. The plot unfolded with sensitivity as Ryan transformed into Rachel backed up totally by his mother, less so by Raz, and not at all by his absent father.

To my mind, the sub plot, and of far less importance, was the fact that Raz could not make the bar pay anymore due to the arrival of a new bar in town, “Nine inches”.  As is often the case in modern times, a predator in the name of a local supermarket group were trying to buy the premises.  The catalyst, Laura, superbly played by Emma Vaudrey, turned the plot completely upside down.  Over several drinks with Raz she finally realised that Ruby Slippers did have a future.  By selling her house she was able to re-invest her money into the club; continuing its success.

Keeping the whole show on the road were the fabulous Owen Richard Farrow as Destiny and his drag sister Jordan Simms as Phoenix.  Sprinkled between scenes they added a frisson of laughs carried right through to the end of the show.  Some of the one liners were slightly vulgar, but then possibly I have missed the point.

Altogether The Ruby Slippers is a well written comedy drama beautifully and sensitively performed by the whole cast.  “Ruby” is a true gem!